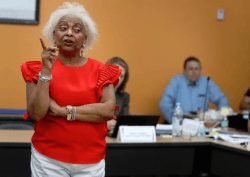 Brenda Snipes has submitted her resignation as the supervisor of elections for Broward County, Florida, after the completion of a recount that brought renewed scrutiny of her tenure, according to a report.

The resignation was confirmed by Burnadette Norris-Weeks, an attorney in the Supervisor of Elections Office.

“It is true. She did send it,” she said. Norris-Weeks also said that the resignation would take effect Jan. 2 which would allow incoming Governor-elect Ron Desantis to select her replacement after he takes office Jan. 8.

Snipes had hinted that she might step down when talking with reporters in recent weeks.

“I can’t wait for this to be over,” she told CNN. And she told another reporter that “It is time to move on, to let someone else (do the job).”

Snipes has been harshly criticized for her mishandling of the 2018 midterm election. Her office lost over 2,000 ballots, failed to count absentee ballots within the required timeframe, mixed invalid ballots with good ones in a way that made them impossible to separate and started a manual recount by counting the wrong ballots. During that recount, former Florida Governor Jeb Bush, the man who put Snipes into that position in 2003, publicly called for her ouster.

“There is no question that Broward County Supervisor of Elections Brenda Snipes failed to comply with Florida law on multiple counts, undermining Floridians’ confidence in our electoral process,” Bush wrote on Twitter Monday. “Supervisor Snipes should be removed from her office following the recounts.”

There is no question that Broward County Supervisor of Elections Brenda Snipes failed to comply with Florida law on multiple counts, undermining Floridians’ confidence in our electoral process. Supervisor Snipes should be removed from her office following the recounts.

This isn’t the first vote Brenda Snipes screwed-up. In the 2016 election, a judge ruled that Snipes illegally destroyed thousands of ballots after and she was sued for having left a medical marijuana amendment off of some ballots.