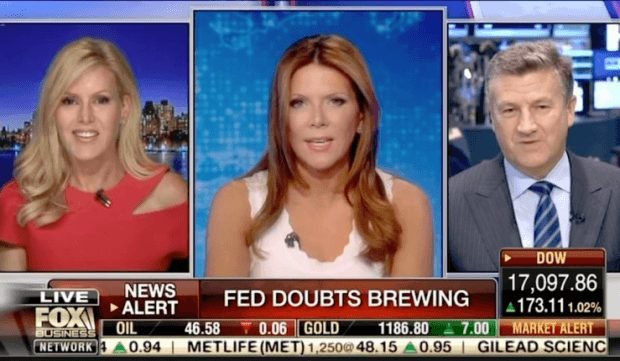 Continuing its reign as the number one market program on television, Stuart Varney’s Varney & Co (9AM-12PM/ET) earned its 27th monthly win over CNBC’S Squawk on the Street/Squawk Alley. Averaging 252,000 in total viewers and 31,000 in the key demo, Varney once again trounced the competition delivering a three-hour win over CNBC in total viewers. FBN’s market-close coverage with Countdown to the Closing Bell with Liz Claman (3PM/ET) also outpaced its CNBC competition, averaging 224,000 in total viewers to CNBC’s 187,000. Together, Varney and Claman have dominated the most critical market hours coverage for 17 straight months.

Following its debut on October 15th, Trish Regan Primetime has ruled the 8PM/ET hour with an 8 percent advantage in total viewers over CNBC’s airings of Shark Tank and American Greed. Kennedy’s eponymous program, Kennedy, also delivered improvements across its new 9M/ET timeslot, growing the audience by 38 percent in total viewers and 16 percent in the A25-54 demo compared to the same time period in October 2017.

Additionally, FBN delivered the top five business programs in total viewers for the month of October, with Lou Dobbs Tonight, Varney & Co, Countdown to the Closing Bell with Liz Claman, After the Bell and CAVUTO Coast to Coast with Neil Cavuto (12-2PM/ET) topping the business news ranker in total viewers.

Support Conservative Daily News with a small donation via Paypal or credit card that will go towards supporting the news and commentary you've come to appreciate.
Tags
Fox Business Network