The Senate Judicial Committee needs “material evidence relevant to allegations of sexual assault” against Supreme Court nominee Brett Kavanaugh, the panel’s chairman wrote in a letter to Ford’s attorneys Tuesday evening shortly following allegations she advised her friend on what to expect during a polygraph.

“The full details of Dr. Ford’s polygraph are particularly important because the Senate Judiciary Committee has received a sworn statement from a longtime boyfriend of Dr. Ford’s stating that he personally witnessed Dr. Ford coaching a friend on polygraph examinations,” the Iowa senator noted.

Grassley was referring to a letter Fox News’ John Roberts obtained from a person claiming to be Ford’s ex-boyfriend. The man said he “found her truthful and maintain no animus” during their relationship from 1992-1998.

The letter added: “During that time, it was my understanding that [Ford’s roommate, Monica] McLean was interviewing for jobs with the FBI and US Attorney’s Office. I witnessed Dr. Ford help McLean prepare for a potential polygraph exam.”

“Dr. Ford explained in detail what to expect, how polygraphs worked and helped McLean become familiar and less nervous about the exam,” the letter continued. “Dr. Ford was able to help because of her background in psychology.” 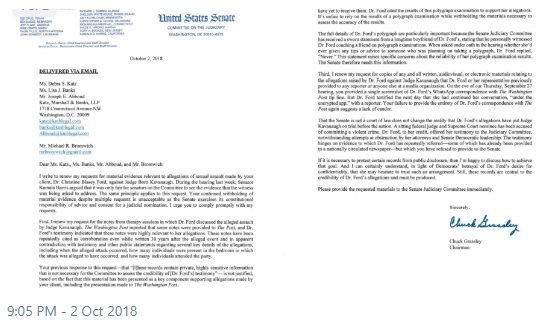 Support Conservative Daily News with a small donation via Paypal or credit card that will go towards supporting the news and commentary you've come to appreciate.
Tags
Brett Kavanaugh Chuck Grassley