Speaking in an exclusive podcast interview with Breitbart News on Wednesday evening, Kerik explained what had transpired earlier at CNN that merited his getting up and walking out.

“I was scheduled to be on CNN. We were supposed to talk about the investigation and seizure of these devices, and right in the beginning of the set, they suspended us and they went to (former CIA Director) John Brennan, who was somewhere speaking … and then he went on a 10-minute rant about the president,” Kerik said.

“You know, as somebody that led through the worst terror attack in our country’s history, and knows how important unity is — especially on a day like today, and in the aftermath of this — I just found it appalling that CNN would use this time to let this guy go on this political rant about the president, and I walked off,” he added.

Kerik emphasized that no one on the panel talked about Maxine Waters, who’s encouraging hostility against conservatives, Eric Holder engaging in violent rhetoric, or the assassination attempt made last year on multiple Republican Members of Congress at a baseball field.

Is it any wonder why Trump supporters shout CNN sucks at his rallies? How much MORE proof do you need? CNN is most DEFINITELY fake news when ANYTHING about our President is being reported. They don’t see anything positive despite all the promises our President has kept and all the MAGA policies he has brought to our country. CNN, MSNBC, ABC, CBS, ,PBS the NYT, WaPo, etc are all doing the bidding of and funded by the Socialists/Communists anti-American Resistance.

The mainstream media would NEVER allow something like what Kerik said that puts Dems in a bad light, to get on the air. If they did, they wouldn’t air his reasons for walking out, but make up their own headline rationalizing his walk out saying “Republican shuns media because we made him wait until after someone else had their say.”

So far Trump has had 280 accomplishments in 20 months, more than all the presidents put together, but you would never know it if you read the mainstream media or TV pundits. Just some of Trumps successes include: having the lowest unemployment rate in 50 years in all aspects of employees blacks, Hispanics, Asian and Women, lowering the FICA tax so people have more money in their paychecks, lowering the big business tax from 35% to 21% thus enabling companies to hire more people, lowering the small business tax from 21% to 15%, giving married couples a $25,000 tax deduction plus just now adding an additional 10%. Giving single people a $12,000 tax deduction plus an additional 10%, giving permission for the Keystone pipeline and Dakota pipeline to be built, thus creating 43,000 jobs, allowing our vets to see their own doctor and the government paying for it rather than having them wait months for a VA doctor, giving terminally ill patients the right to try a new controversial procedure if they have a terminal disease instead of flying overseas for a cure, lowering prescription drugs, It was President Trump who acknowledged that Jerusalem is the Capital of Israel. And he had the US Embassy moved to Jerusalem,  building up our military after Obama lowered it to pre WW 11 conditions, getting North Korea to denuclearize and getting our hostages back without paying a cent as opposed to Obama giving Iran 1.7 billion for our hostages and getting North Korea to send the remains of our soldiers back from the Korean War, getting rid of  800 of Obama’s 1200 regulations that were hindering us from achieving  so companies can come back here and make things in America again. So far 630,000 manufacturing jobs have been added, you know, the jobs Obama said were never coming back and you needed a magic wand for them to come back.

No the mainstream media won’t report any of this which is why Trump calls them the enemy of the people.  Many people in this land should wake up and see that our present president is trying to save this nation before it becomes a disgrace and goes into oblivion which is where it was headed. 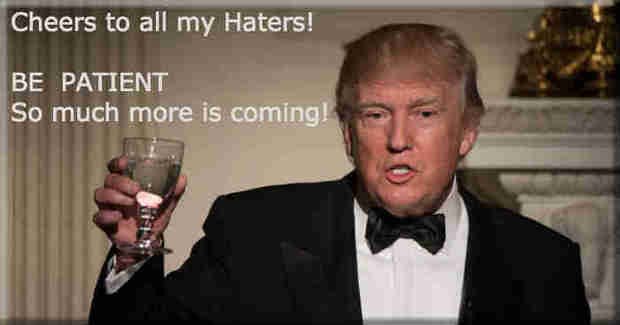