The Senate Judiciary Committee referred to the FBI on Saturday a false allegation of sexual misconduct levied against Judge Brett Kavanaugh.

“The Senate Judiciary Committee today referred for criminal investigation apparent false statements made to committee investigators alleging misconduct by Judge Brett Kavanaugh,” a letter from the Committee read. “The committee is grateful to citizens who came forward with relevant information in good faith, even if they are not one hundred percent sure about what they know. But when individuals provide fabricated allegations to the Committee, diverting Committee resources during time-sensitive investigations, it materially impedes our work.”

Committee Chairman Chuck Grassley has called on the Justice Department and the FBI to review the matters as a possible violation of 18 U.S.C. – 1001 and 1505, which reference the sharing of materially false information with investigators and obstruction of a congressional investigation.

These allegations are likely in reference to a person who claimed Kavanaugh was on a boat beating people, which was later retracted. But, the same legal ramifications are present should Julie Swetnick, Christine Ford or Deborah Ramirez also be shown to have made false allegations against a great man.

Full Text of the Letter 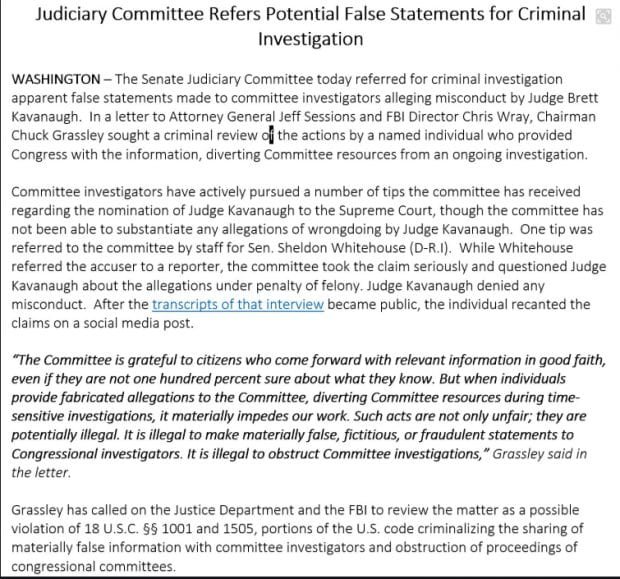