CNN and The Hill both spread a bombastic accusation of sexual assault against Supreme Court nominee Brett Kavanaugh on Wednesday, without mentioning that the man who made the accusation has since retracted the claim and apologized for making it.

A Rhode Island man called Democratic Rhode Island Sen. Sheldon Whitehouse’s office and claimed that Kavanaugh and one of the judge’s high school friends, Mark Judge, had drunkenly sexually assaulted a friend of his while in Rhode Island in 1998, according to the transcript of a Senate Judiciary Committee interview with Kavanaugh.

The man’s name was redacted in the transcripts released to the public but the investigator quoted verbatim several outlandish anti-Trump tweets from the man’s Twitter account, allowing reporters to definitively identify him on Twitter as “Jeffrey Catalan.”

Catalan retracted the claim shortly afterward and said he made a “mistake” in leveling the false charge against Kavanaugh. “I have recanted because I have made a mistake and apologize for such mistake,” the man wrote on Twitter.

But those details didn’t make it into CNN and The Hill’s initial reports. 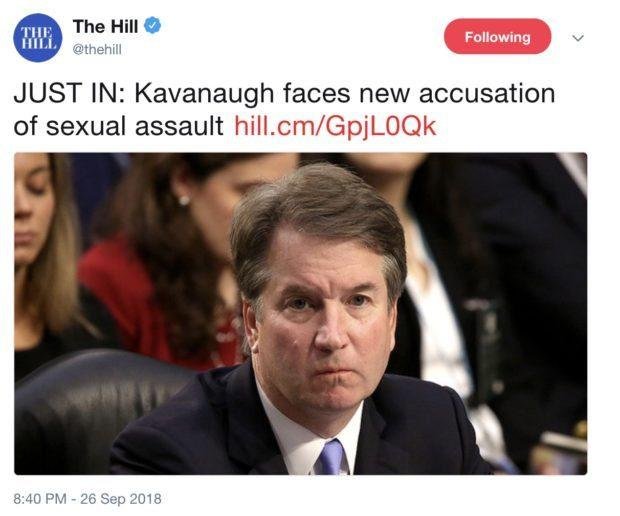 The Hill’s initial misleading story did not note that Catalan had apologized for his claim, despite being published more than 20 minutes after he retracted it.

After an inquiry from The Daily Caller News Foundation — which The Hill did not return by press time — the publication noted the Twitter account’s retraction.

The update was placed more than halfway down the piece, which still left out the accuser’s outlandish tweets.

CNN, which did not immediately return a request for comment, similarly left out crucial context in its report, which was titled, “Kavanaugh denies two additional accusations to Senate Judiciary Committee.”

By press time, CNN had not corrected its misleading report, which included neither the accuser’s retraction nor his inflammatory tweets.

The other accusation was an anonymous letter from a person who — while refusing to reveal any names of those involved other than Kavanaugh — accused the nominee of pushing their daughter up against a wall, which Kavanaugh denied.

Support Conservative Daily News with a small donation via Paypal or credit card that will go towards supporting the news and commentary you've come to appreciate.
Tags
Brett Kavanaugh CNN media bias The Hill