Democrats used cherry-picked Pew Research statistics Wednesday to indicate to the base that their side is winning the turnout battle in the 2018 midterm elections – there are a few problems with their analysis of the report.

Retweeting HuffPost reporter Kevin Robillard, Democrats hope to make the case that their base is excited and effective so far and that the momentum is enough to make the difference in the midterms.

We have less than 100 days until we make history in our country! Let's keep this momentum going. #IWillVote https://t.co/iO7fm5fjrH

There’s something that Mr. Robillard chose not to emphasize in those numbers: the majority of Democratic turnout gains are because there have been far more contested Democratic primaries for House seats than GOP primaries for House seats this year. In fact, the increase in the number of Democrat contested races over 2014 outpaced the Republicans’ differential by ten times.

Regardless of party, more voters turn out for contested primaries than for primaries where the winner is pre-determined. Add that to the fact that midterm elections pull in far fewer voters than presidential election years and the statistics the Democrats are promoting become little more than … propaganda.

In contrast, Pew’s research shows that Senate and Gubernatorial primaries, where not near as many contested races have or will be held, show that turnout increases have been roughly equal among both parties and the overall turnout mix still favors the GOP (+2 R Senate, +2.2 R Governor). 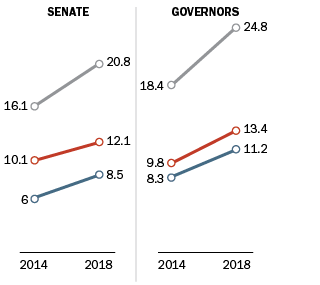 While Democrats are hoping that the Pew Research report finally shows that their mythical blue wave is materializing, it’s only due to a large number of hotly contested Democrat-on-Democrat primaries in the House. Those numbers may not indicate a huge differential in the 2018 midterms as there are not enough tossup races to overcome the huge GOP advantage in uncontested races.

In the Senate midterm elections, there are 35 races where incumbents face a re-election challenge. Of those, 26 current Democrat Senators will be on the ballot while only 9 Republican members will need to win their seats back. Only two of the GOP races are considered tossups while four of the Democrats face contested races. It is very likely that Republicans actually gain seats in the Senate.

The news is much worse for Democrats in the House.

Of the 435 members in the House, all of which who face re-election, 156 Republicans are in safe districts where 184 Democrats are, giving Dems a 28 seat advantage (+28 D) in safe seats. Breaking down the competitive races, 53 are looking like GOP wins, 17 look like wins for Democrats and 25 are considered tossups. That’s +36 for Republicans across competitive races which, after subtracting the Democrats’ “safe race” advantage of 28 seats, leaves the GOP +8. That means that Democrats must win 18 of 25 tossup races, 9 more than Republicans, to regain a majority in the House. This differential allows the GOP to more easily focus their resources where they are needed while the Democrats will have to spend just about everywhere if they hope to gain the Speakership.

In both the 2018 House and Senate races, a massive blue wave would be needed to flip Congress and according to the Pew Research report, it’s not very likely.

Support Conservative Daily News with a small donation via Paypal or credit card that will go towards supporting the news and commentary you've come to appreciate.
Tags
Blue Wave Democrats the 2018 Midterm Elections