By any reasonable standard, the presidency of Donald Trump has so far been a success. After eight years of Barack Obama’s sluggish recovery from the 2008 Great Recession, the economy is “blistering,” its vigorous growth creating jobs, raising incomes, and lifting the market’s “animal spirits. Allies, rivals, and enemies alike now taking us seriously as the indispensable world power to treat with respect.

Yet despite all these reasons for feeling good about the country’s getting its mojo back, the current mood is one of crisis and hysteria. We’re consumed by a special counsel’s show trials of marginal Trump associates whose actions had no material impact on the election or the public will. Appointed to investigate “collusion” with Russia and foreign interference in our election, all that Robert Mueller can come up with are paltry financial crimes and duplicitous perjury traps. Consequential developments abroad, such as Turkey’s implosion and a war brewing on Israel’s northern border, are ignored so we can pick over the carcasses of a couple of bottom-feeding swamp-fixers like Paul Manafort and Michael Cohen.

Recently former Clinton Secretary of Labor, Robert Reich, wrote an essay on how impeaching President Trump isn’t enough. “We have to completely erase him. “The only way I see the end of Trump is if there’s overwhelming evidence he rigged the 2016 election. In which case impeachment isn’t an adequate remedy. His presidency should be annulled,” wrote Reich.

“Suppose, just suppose, Robert Mueller finds overwhelming and indisputable evidence that Trump conspired with Putin to rig the 2016 election, and the rigging determined the election’s outcome. In other words, Trump’s presidency is not authorized under the United States Constitution,” he wrote.

So Reich thinks Trump rigged the election? You could have fooled me with Hillary suddenly adding super delegates, her paying a British spy. Christopher Steele, a million dollars laundered through the law firm Fusion GPS with DNC money to write a phony dossier with fake Russian connections  on Trump so they could get a FISA warrant to spy on a Trump campaign worker, Carter Page.  Recently Kelley Ann Conway sarcastically remarked that the word “dossier” was a French word meaning “full of crap.”

But it wasn’t Donald Trump who was guilty of Russian collusion. It was Hillary Clinton and U.S. intelligence officials who worked with Russians and others to entrap Trump.

Wasn’t it Hillary who sold Putin 20% of America’s weapons grade Uranium for 145 Million in Russian bribe Money to her foundation!!!!!! Did not Billy Bob Clinton get 500K for a 45 minute speech directly to PUTIN Titled: “It Pays to Play With a Clinton” Yes, Mueller even delivered the Uranium sample to Putin for Hillary, Once Putin Ok’D the sample Mueller gave Hillary the OK to seal the Uranium One Deal. Then Rosenstein and Obama and Mueller ran a cover up of this deal!!! Did Not Hillary Purchase a Fake Russian Dossier to frame Trump for their Insurance Policy? This was an Obama and Hillary conspiracy. They are the True Russian Colluders!!!!! Their tactics and Reich’s assertion that Trump rigged the election are tactics right out of Saul Alinsky’s Rules for Radicals handbook that says to “blame others for your mistakes.” 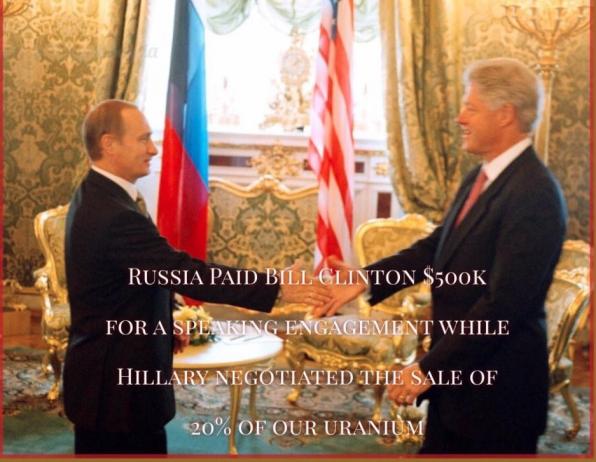 Now according to a document making the rounds among House Republicans, their Democrat counterparts are planning to handicap President Trump with more than 100 potential investigations if they take control of the House in the midterms this November. The spreadsheet outlines the possible investigations that Democrats will open in order to create gridlock, destroy Trump’s approval ratings, and set the White House up for failure as the president heads into the second half of his term. Republicans expect Democrats to open up investigations into, among other things, President Trump’s tax returns, his family businesses, his business ties to Russia, the Stormy Daniels payment, the firing of FBI Director James Comey, and more.

I find it funny that Democrats didn’t care about Obama giving Iran, the No.1 state sponsor of terrorism 150 billion dollars for some unknown reason, they didn’t mind Hillary misplacing or losing six billion dollars while Sec. of State, but they do care when Trump pays some hooker with his own money when he wasn’t president.

Congressional Republicans are getting ready for hell. Axios has obtained a spreadsheet that’s circulated through Republican circles on and off Capitol Hill — including at least one leadership office — that meticulously previews the investigations Democrats will likely launch if they flip the House,” reported the website Axios.

Make no mistake: If Democrats take the House in the fall, legislative work on Capitol Hill will grind to a standstill while the newly-energized left takes every shot they can load against this president. That will become the sole priority for Democrats in the House – to make Trump a one-term president by any means available and necessary. It’s literally unthinkable that it would play out any other way.This is the type of sick politics that democrats play. They will do anything to eliminate a president who has exposed their criminality. Everything Trump has accomplished that the American people elected him for, a roaring economy, lower taxes lower taxes, low unemployment will all come to a grinding halt and America will fall back into dispair again.

Democrats know all about corruption, they have been engaged in it for decades and if they can throw some of their stink on Trump they will. They don’t care about America, they just care about power and controlling the people and will resort to any means possible to achieve that power. That is why it is absolutely mandatory that republicans stay in power with this upcoming election.