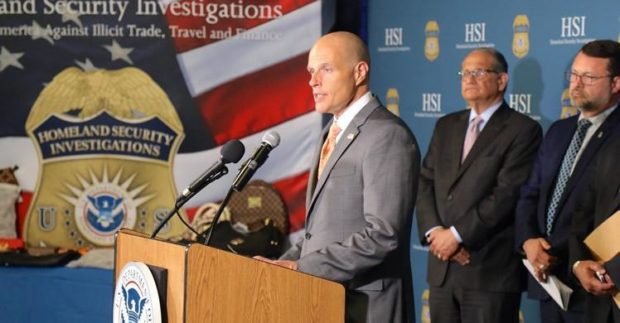 34 individuals were charged Thursday following an investigation by U.S. Immigration and Customs Enforcement’s (ICE) Homeland Security Investigations (HSI) into a scheme to illegally bring into the United States millions of dollars of Chinese-manufactured goods by smuggling them through ports of entry on the East and West Coasts.  One defendant is also charged with unlawful procurement of naturalization.

The charges include conspiracy to traffic, and trafficking, in counterfeit goods; conspiracy to smuggle, and smuggling, counterfeit goods into the United States; money laundering conspiracy; immigration fraud and unlawful procurement of naturalization.  In addition, the government restrained nine real properties in Queens, Staten Island and Brooklyn, New York belonging to the defendants.

“This investigation exposed the global nature of intellectual property crimes, allegedly being executed by those arrested today.  Counterfeit goods manufactured and smuggled from China with a suggested value close to half a billion dollars, were intended to make its way into U.S. markets and into the hands of unsuspecting consumers,” said HSI Special Agent-in-Charge Melendez.  “This investigation should be a crystal clear message that counterfeiting and intellectual property rights violations is anything but a victimless crime as it harms legitimate businesses, consumers and governments.”

“The defendants allegedly smuggled millions of dollars of counterfeit luxury goods into our country, depriving companies of their valuable and hard-earned intellectual property,” said Assistant Attorney General Benczkowski.  “The illegal smuggling of counterfeit goods poses a real threat to honest businesses, and I commend our federal prosecutors and partners at HSI and the NYPD for their outstanding work on this important investigation.  The Department of Justice is committed to holding accountable those who seek to exploit our borders by smuggling counterfeit goods for sale on the black market.”

“As alleged, the defendants used many forms of deception to smuggle large quantities of counterfeit luxury brand goods from China into the United States, and then profited by distributing and selling the fake merchandise,” said U.S. Attorney Donoghue.  “This Office, working with our law enforcement partners, is committed to securing our country’s ports of entry, as well as to protecting the integrity of intellectual property upon which free and fair international trade and markets depend.”

According to the court filings, the defendants played various roles in the trafficking of counterfeit goods manufactured in China, brought by ocean-going ships to the United States in 40-foot shipping containers, smuggled through ports of entry disguised as legitimate imports and distributed throughout the country.  The counterfeit goods included items such as fake Louis Vuitton and Tory Burch handbags, Michael Kors wallets, Hermes belts and Chanel perfume.  The defendants’ roles included:

The charges in the indictments and criminal complaint are allegations, and the defendants are presumed innocent until proven guilty beyond a reasonable doubt in a court of law.

Support Conservative Daily News with a small donation via Paypal or credit card that will go towards supporting the news and commentary you've come to appreciate.
Tags
China counterfeit merchandice U.S. Immigration and Customs Enforcement