Democrats are holding a state convention in Worcester, Mass. this weekend and Twitter is alive with the #DemVention hashtag, but what’s with the Canadian flag displayed so prominently?

Twitter user Sean Gauthier posted a picture of the DCU center that showed the happenings at the convention. “Gotta love all these Dems in one place!” he tweeted.

It’s hard to tell in this picture if there is an American flag to be found in the convention, but Sean posted another one just a bit later that shows Star-Spangled Banner on stage, albeit much smaller and not so prominent.

I also wanted to find a wider shot that captured more of the DCU ceiling to see if maybe an American flag was hanging, but just not in Sean’s photo. I found one that may be from the 2017 convention that shows another Canadian flag that was likely blocked by the ceiling-mounted jumbotron in Sean’s picture.

Now, the Stars and Strips are displayed on the monitors so some credit is due, but I still don’t understand why the Canadian flag gets so much attention at an American political event.

A Twitter user responded to this story and said that the arena is the home of a minor league hockey team and since they host Canadian teams, both flags are displayed. DCU arena is the home of the Worcester Railers, a farm team for the New York Islanders. I haven’t found a picture that shows both flags yet, but the explanation makes sense.

It’s the home of a minor league hockey team that hosts Canadian teams ALL hockey arenas have both flags. https://t.co/pA4EFfXNlK

I am hoping to find a picture that shows our flag just as prominently displayed – something like this one from TD Place Arena in Canada. 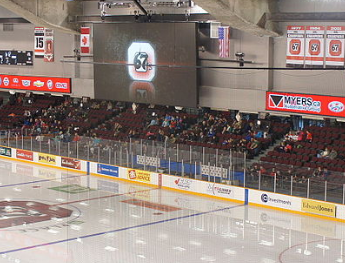 And finally, Charles Miles sent us a picture that shows both:

Update: This story was updated to include a possible explanation for the Canadian flag,  a photo that shows both, and noted that one photo is from a past convention. 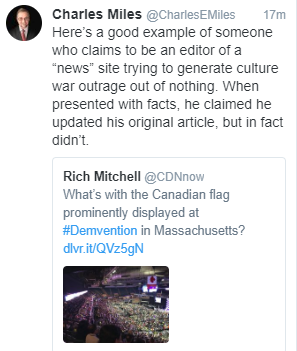 The link goes to this article which was not only updated with the image HE sent us, but with a link to the tweet he used to send it to us. Speaking of creating outrage out of nothing…

Perhaps Charles was upset that we didn’t wholesale modify the article to look like we never questioned the Canadian flag? That’s how the liberal outlets do it. No, we updated the article with new information and included an editor’s note about the updates. We didn’t rewrite the thing or just delete it.

Support Conservative Daily News with a small donation via Paypal or credit card that will go towards supporting the news and commentary you've come to appreciate.
Tags
Democrats Massachusetts Worcester