On his Tuesday episode of Morning Joe, Scarborough, a former Republican, recalled the “bleak situation” of six months ago, when talk of a ground war with North Korea bubbled up at the Pentagon’s top brass amid tensions with the regime. Scarborough admitted that the de-escalation culminating in Tuesday’s summit would look good for Trump when voters saw the front-page news.

“[American voters] are going to look at the front page of the paper today and they’re going to say, ‘Good on him. This is a hell of a lot better than a nuclear war,’” Scarborough said.

Trump’s first year in office was marked by hostility toward Kim, who he called a “Little Rocket Man” and threatened with “fire and fury like the world has never seen.” But Scarborough admitted that Trump’s brash approach may have convinced Kim to come to the table.

“Who knows, maybe shaking things up, maybe saying ‘no’ to the experts, maybe raising hell on the world stage, maybe calling him ‘Little Rocket Man,’ maybe threatening him got these two together,” Scarborough suggested. …Of course it did Joe. You have to be tough with these leaders and not wimp out like Obama, Clinton and Bush did thinking if you’re nice to them they’ll be nice to you. It doesn’t work that way today. This is a world ruled by the aggressive use of force and that’s what Trump did here. Once you gain their trust hen you can deal with them like Trump did.

Morning Joe and those pendants on MSNBC are such wimps and deniers. They want to see Trump fail and in turn if he fails the country fails. Now Joe says he is so relieved that nuclear war didn’t break out from Trump’s rhetoric. I never had any doubts or scares about Trump and Kim’s rhetoric. We have the mightiest military in the world that would prevent a nuclear war from happening though Obama tried to change that by reducing us to pre-WW11 status. Thank God Trump came along and building it up again to where it should be. Don’t they realize we have missiles and lasers from space that can knock out any missile as soon as it is launched long before it hits here? These Trump haters act like we are completely vulnerable and have no defense.

Here is the basic crux of the whole agreement that the regular media doesn’t mention or just glosses over:

The sanctions will remain until the nuclear military program has been dismantled, and if there is a resumption of progress toward deployable nuclear ICBMs, the U.S. will exercise its military option. The U.S. Navy in the augmented Seventh Fleet offshore has the cruise missiles necessary to decalibrate the artillery focused on the immense city of Seoul, South Korea, just across the 38th parallel, and the Fleet’s nearly 300 aircraft in the carriers Nimitz, Theodore Roosevelt, and Ronald Reagan certainly possess the power to dispose of the few authentic nuclear sites Kim possesses. The achievement is in securing Kim’s acquiescence to the agreed objective, and, whatever waffling and chicanery may yet occur, implicitly to the penalties that will be imposed if the nuclear program is resumed.

With such might and military power so close at hand we don’t need to carry out war games any longer in spite of what Trump critics say. The President is trying to bring peace to the region. This is a good thing for the world.

Our President deserves strong, positive support for what he has done with NOKO. We should be ashamed of those who play down this significant achievement. Trump has said from the start this would occur in stages. Rome wasn’t built in a day. Give it time! Godspeed.

There is little or no mention of the great courage of the president in admitting what he is trying may fail in the face of an unrelenting enemy within. If this was Obama the media would be wetting their pants now and Chris Mathews would be having tingles up and down both legs. All Obama did was send Iran 150 billion dollars in cash and an additional 1.8 billion for the hostages release on pallets flown on planes in the dead of night – how low and pathetic. The Democratic Party is betraying America at every turn. The Democratic Party hates the American People. The Democratic Party hates a thriving economy. Elitists on the American Left would rather see thousands of soldiers from Working Class America in body bags than to see President Trump succeed on the Korean Peninsula, but he is much to their dismay. 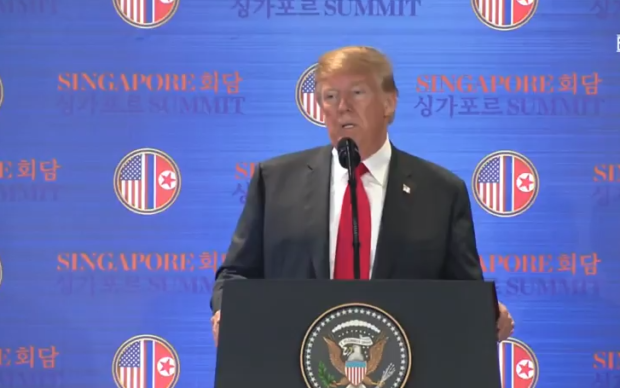 Support Conservative Daily News with a small donation via Paypal or credit card that will go towards supporting the news and commentary you've come to appreciate.
Tags
North Korea