Top News
Home >> Trending Topics >> Science, Technology, and Social Media >> One Tip Will Triple the Chances of Getting Back Your Lost Smartphone this Summer

Posted by: Duncan Idaho in Science, Technology, and Social Media June 26, 2018 Comments Off on One Tip Will Triple the Chances of Getting Back Your Lost Smartphone this Summer

This summer, Americans should keep a close eye on their prized smartphones. Mobile protection claims data from Asurion, the global tech solutions company, indicates the summer months see more than a 50% jump in smartphone loss and theft.

To help arm consumers against this summer surge, Asurion purposefully “lost” smartphones in three major cities across the U.S. to test the likelihood of them being returned. The result: Locked phones featuring a contact number on the device’s lock screen were three times more likely to be returned to their owners. 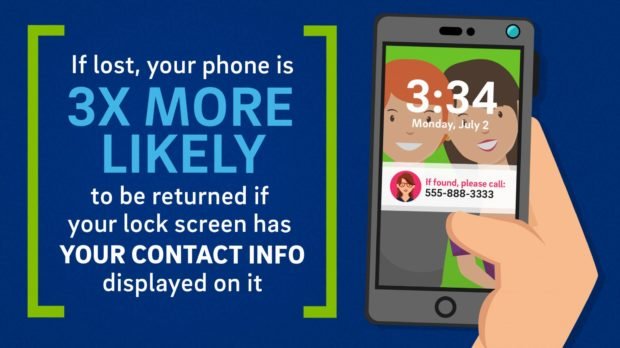 To help protect consumers against the expected surge of lost smartphones this summer, tech help services company Asurion purposefully lost smartphones in three major cities across the U.S. to test the likelihood of them being returned. The result: Locked phones featuring a contact number on the devices lock screen were three times more likely to be returned to their owners. (PRNewsfoto/Asurion)

Seventy-one percent of Americans lock their smartphones with passcode, fingerprint or facial recognition protection. However, less than 1 in 4 say their screens are password protected with contact information featured on the screen, according to a recent Asurion survey1.

“It’s great that a majority of Americans keep their phones locked with a passcode, but that makes it nearly impossible for a good Samaritan to return it to you,” said Bettie Colombo, Asurion spokesperson. “Adding an image on the lock screen that includes an ‘if lost’ contact number or email address makes it easier for someone to return it to you. Our data shows this simple trick will greatly increase your chances of getting your phone back if you lose it.”

Asurion, which provides device protection and tech help services to millions of wireless customers, left smartphones at key summertime hotspots in Los Angeles, New York City and Atlanta, including the beach, popular parks, and on public transit to emulate common real-life summer scenarios for tourists and locals. Half of the phones were left with the screen locked with a contact number displayed right on the screen for easy return, while the other half were left unlocked with a contact phone number listed within the phone’s contact list.

Asurion tech experts tell us how to keep your device safe this summer:

0
Previous: The Left’s War On Conservative Women
Next: Housing Demand Index Up 7% in May