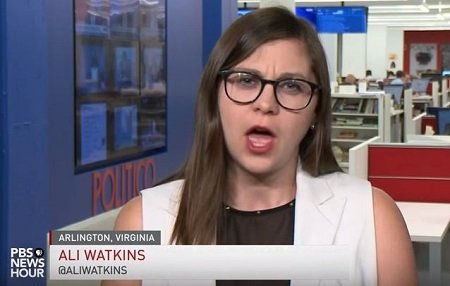 The New York Times is reviewing the work product of Ali Watkins, a national security reporter who had a multi-year relationship with a Senate Intelligence Committee staffer who was recently indicted in a leak investigation.

The newspaper revealed on Tuesday that it is looking into Watkins’s relationship with James A. Wolfe, the former director of security for the Senate Select Committee on Intelligence. Wolfe was indicted last Thursday for lying to the FBI about contacts he had with several reporters, including Watkins.

According to the indictment against Wolfe, he had contact with Watkins and the other reporters at around the time they all published articles about former Trump campaign adviser Carter Page.

Wolfe, 57, lied to FBI agents during a Dec. 15, 2017 interview about knowing the reporters. The indictment cites encrypted messages in which Wolfe had contact with the reporters. FBI agents also showed Wolfe photographs of him with Watkins, with whom he began a relationship in Dec. 2013.

But less attention has been paid to the apparent smear campaign that Wolfe waged through the media against Page.

When Watkins worked at BuzzFeed, she published an April 3, 2017, article that revealed that the former Trump aide was the person identified as “Male-1” in a 2013 Russian spy ring case.

The court documents revealed that a Russian spy approached Page in what the FBI believed was a recruitment attempt. Page said he was unaware that the Russian was a spy. He also denied providing the Kremlin agent with any sensitive information. He cooperated with the FBI as part of its investigation and was not accused of wrongdoing.

Watkins’ article added to the mystique surrounding Page, who was accused in the infamous and unverified Steele dossier — also published by BuzzFeed — of being the Trump campaign’s back channel to the Kremlin. Page has denied the allegations.

Watkins, 26, began a romantic relationship with Wolfe in Dec. 2013, when she was a student at Temple University. Several months after she began dating Wolfe, Watkins contributed to an article at McClatchy about alleged CIA spying on the Senate Intelligence Committee.

Watkins would later write for The Huffington Post, BuzzFeed and Politico before joining The Times in Dec. 2017. She focused heavily on national security and published numerous stories about the activities of the Senate Intelligence Committee.

BuzzFeed acknowledged to The Daily Caller News Foundation that Watkins disclosed her relationship with Wolfe. The website did not disclose the relationship to readers.

According to The Times, Watkins has claimed that Wolfe did not give her information while they were together, though that claim is contradicted by messages that Wolfe sent to Watkins that are cited in the government’s indictment.

In Dec. 2017, Wolfe told Watkins that he “always tried to give you as much information that I could and to do the right thing with it so you could get that scoop before anyone else.”

Wolfe was likely a source for other reporters, the indictment suggests.

The court filing refers to an Oct. 17, 2017 article about a Senate Intelligence Committee subpoena against Page. The article was written by NBC News reporters Marianna Sotomayor and Kasie Hunt. Sotomayor emailed Page at around the time her articles appeared, a source familiar with the matter tells TheDCNF.

Wolfe will appear for the first time in federal court on Wednesday. He is expected to plead not guilty.

Support Conservative Daily News with a small donation via Paypal or credit card that will go towards supporting the news and commentary you've come to appreciate.
Tags
Ali Watkins James A. Wolfe The New York Times