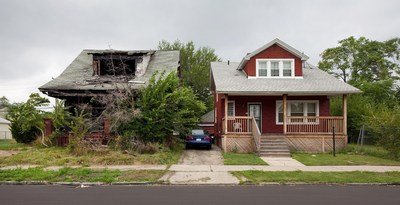 Despite a drop in numbers across much of the United States since the recession, vacant and abandoned properties continue to dog struggling postindustrial cities, tearing apart neighborhoods with growing intensity, according to a report published by the Lincoln Institute of Land Policy.

Since the 1990s, vacancies have become more widespread in cities such as Detroit, Cleveland, and St. Louis, former industrial powerhouses known as legacy cities, researcher Alan Mallach writes in the Policy Focus Report The Empty House Next Door: Understanding and Reducing Vacancy and Hypervacancy in the United States. These vacancies are driving property values down, hurting cities’ financial health, and contributing to higher crime rates. At the same time, cities have had some success with strategies to rehabilitate, selectively demolish, and reuse vacant properties as new housing or green space.

The report analyzes U.S. Census and Postal Service data for 15 legacy cities — ten large and five small — as well as for magnet cities such as San Francisco and Boston, and Sunbelt cities such as Phoenix and Dallas. The report focuses especially on two indicators: hypervacancy, the condition in which at least one in five properties sits vacant, and so-called “other vacancies,” a Census term for properties sitting unused and not for sale or rent — effectively abandoned.

At such levels of vacancy, “the market effectively ceases to function,” Mallach writes in the report. “Houses sell, if they sell at all, only to investors at rock bottom prices while the neighborhoods become areas of concentrated poverty, unemployment, and health problems.”

Meanwhile, the number of units that are effectively abandoned has increased by 2.1 million units nationally, from 3.7 million in 2005 to 5.8 million in 2016, an increase roughly equal to five times the entire housing stock of San Francisco. These properties represent less than a third of all vacant properties in magnet and Sunbelt cities, but about half of all vacancies in large legacy cities and roughly two-thirds of vacancies in the smaller legacy cities, which face the greatest economic challenges, as detailed in the report Revitalizing America’s Smaller Legacy Cities.

The Empty House Next Door describes barriers to addressing vacancies, including cumbersome property tax foreclosure processes, and state laws and bank practices that lead to thousands of properties being stuck in foreclosure limbo.  Legal tools including “spot blight” eminent domain, vacant property receivership, and land banking have helped communities gain control of abandoned properties in some cities, but are unavailable or under-utilized in others.

Some cities have pursued strategies to promote reuse of vacant property. In Cleveland and Youngstown, Ohio, collaborative public-private efforts have combined strategic demolition with rehabilitation to make refurbished homes available to new buyers at affordable prices. Baltimore uses receivership to place vacant properties in the hands of for-profit and nonprofit developers in targeted areas with market potential, putting 1,300 units back to use since 2010.

In neighborhoods with less redevelopment potential, cities have converted vacant properties into green space. Cleveland, for example, published a catalog of potential green uses for vacant land and worked with a nonprofit partner to make $500,000 in grants to 56 small parks, rain gardens, and agricultural projects. In Philadelphia, the Pennsylvania Horticultural Society has pioneered an inexpensive, low-maintenance approach to greening more than 7,000 vacant lots.

With inspiration from these successes, the report recommends that cities collect better data on vacancies, remove legal impediments to reuse, adopt and use strong legal tools, use public strategies to overcome obstacles to market-driven reuse, make greening a long-term strategy, and balance demolition with rehabilitation as part of a larger strategy for revival.

Support Conservative Daily News with a small donation via Paypal or credit card that will go towards supporting the news and commentary you've come to appreciate.
Tags
housing market