The Clintons are like herpes: Just when you think they’re gone, they show up again.”- Tim Allen

When Hillary Clinton lost the election, instead of resigning gracefully she chose to lead the resistance again  Trump and stay in the middle stage front and center. She and Obama are working behind the scenes to oust Trump since he interfered with their plans to turn this country into a socialist /communist state..

Eighteen months after the American people told Hillary exactly where to go, the soulless political operative  is everywhere promoting her whiny What Happened memoir and hurting her party by keeping her almost innumerable misdeeds front and center, likening  Republicans to Klansmen and Nazis, supporting the left-wing Resistance to President Trump, Embarrassing her fellow Democrats with her abusive rhetoric aimed at half of America. Do you want to know what happened  Hillary? Trump happened that’s what and now his approval rating is higher than Obama’s ever was at 51%. Just wait until next year when the tax cuts really set in when people get $12,000 and $25,000 dollar deductions on their tax forms and companies start moving back here..

In recent travels overseas, Hillary has been badmouthing President Trump and her fellow Americans. During a March visit to India, Hillary viciously unloaded on her enemies – in particular, the 63 million Americans who voted for President Trump in 2016. Ordinary Americans are pessimistic, racist, sexist hicks, she said.“If you look at the map of the United States, there’s all that red in the middle where Trump won,” she said. “I won the places that are optimistic, diverse, dynamic, moving forward. And his whole campaign, ‘Make America Great Again,’ was looking backward.”

“‘You know you didn’t like black people getting rights,” she said. “You don’t like women getting jobs. You don’t like seeing that Indian Americans [are] succeeding more than you.”

As usual – Hillary is saying the polar opposite of the truth. Blacks have flourished under President Trump! Women/families have child care deductions under President Trump. Indian Americans are thrilled with tax breaks, high GDP, Trump admin. relations with India and the appointment of American Indian  UN Ambassador Nickey Haley!

Under Trump more women are working than ever before, more blacks and Hispanics are working than ever before and the economy is booming with unemployment now down to 3.9%. Since she and her followers and Dems don’t like Trump and are devoted to resisting him they must not want to see more women working which makes them sexists. They must not want to see more blacks and Hispanics working so that makes them racist and they must not like seeing the country succeed so that makes them haters of America.

Last month a lawsuit claimed Hillary’s campaign and the Democratic National Committee “used state chapters as strawmen to launder as much as $84 million in an effort to circumvent campaign donation limits, and the Federal Election Commission ignored complaints exposing the practice,” according to a Fox News report. It is yet another legal proceeding against the Clintons that seems destined to fail because Hillary is protected from on high.

She constantly is finding new things to blame for election loss and now a year and a half later she is still doing it. Here are all the things he has blamed so far.

Yesterday, in her latest excuse for losing she claimed she lost the election because she had said she was a capitalist and campaigned in states that were socialist. I didn’t think some states were socialist and some were capitalists. I thought we were all governed under one form of government capitalism even though that seems to be shrinking now and some states lean towards socialism.

Hillary is a true and accurate representative of the criminal party. Rudy Guiliani called her an outright criminal on Sean Hannity’s show Wednesday night.

We know Hillary paid for the bogus “piss-gate” dossier compiled by sleazy Trump-deranged ex-spy Christopher Steele. We know Hillary took bribes from Russia to hand over strategic U.S. uranium reserves while serving in the cabinet of Barack Obama, the most pro-Russian president in American history. We know Hillary created a homebrew email system to conceal her illicit activities while secretary of state and that while working at Foggy Bottom her terrorist-linked top aide Huma Abedin directed those seeking access to her boss to make large “donations.” We know that Hillary’s puppet, then-Virginia Gov. Terry McAuliffe (D), directed what certainly looked like a bribe aimed at former top FBI official Andrew McCabe in the form of a nearly $700,000 donation to the Virginia state senate campaign of his wife, Jill McCabe (D). We know she deleted 30,000 subpoenaed e-mails with bleach bit and had an aid destroy 13 blackberries with a hammer all which is obstruction and yet Hillary is still out there in public, acting as if she did nothing wrong. Maybe it’s because she knows she will never be held accountable for her lawbreaking.

The Clintons continue to prove that some people are above the law. They are a crime family after all and operate much like the mafia which is further proof of what President Trump said about the corruption in the swamp known as establishment politics. 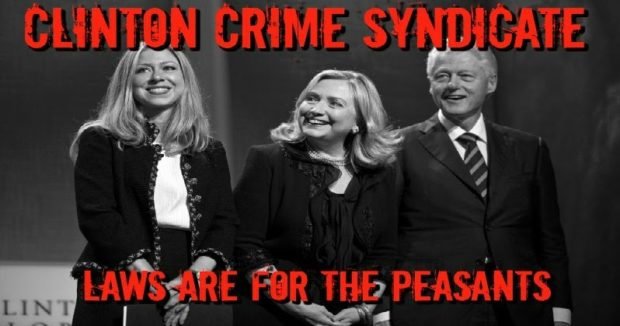