When James Comey was investigating Hillary’s e-mails the left hated him and wanted to excoriate him publicly. Now that he’s turned against Trump with his new book out they love him. Former New York City Mayor Rudy Guiliani and now Attorney for Trump said Wednesday night on Sean Hannity’s show that Comey is a disgraceful liar and should be prosecuted for leaking classified memos to the media through a personal friend.

So far after a year and a half into Muller’s investigation, there has been no proof of any collusion, but Hilary Clinton is the one who has committed crime after crime and with Russian collusion and they don’t even touch her. Comey said no prosecutor will prosecute her and she respects the rule of law. WHAT!!!!!! He’s as delusional as she is and sneaky too. This is one liar covering up for another liar and criminal.
The following is a letter I received from Peter Thomas who is chairman of the Stand With Trump grassroots organization: Former FBI Director James Comey should be going to jail! He should not be going before another camera for yet another interview with yet another sympathetic fake news media “reporter on his book tour.”

James Comey admitted that he gave FBI property (memos he made about meetings he had with President Trump while he was FBI Director) to a law professor to pass on to The New York Times in order to spur the appointment of a Special Prosecutor. Those memos were government materials that should NOT have been released and/or used as a weapon in a personal vendetta against the President. That’s a crime!

James Comey withheld the fact the phony so-called “Steele Dossier” was bough-and- paid- for by Hillary Clinton’s Presidential campaign and the Democrat National Committee when he presented it as “evidence” to a FISA Court in order to help gain a warrant to surveil a Trump advisor. That is at least unethical and should be investigated! .
James Comey denies he knew about the leaks made by then Assistant FBI Director Andrew McCabe to The Wall Street Journal about the bureau’s Clinton investigation. McCabe says Comey is lying. Well, one of them is lying and that too should be fully investigated! .

After the extraordinary raid on the home and office of President Trump’s personal attorney, there can no longer be any doubt that the deep state is determined to drive President Trump out of office by any means necessary!

James Comey has been from day one at the center this deep state storm. He presided over both the botched Hillary Clinton email investigation and the Trump Russian “collusion” witch hunt. By his own admission, he spurred the appointment (by his good friend FBI Deputy Director Rod Rosenstein) of a Special Counsel (his good friend Robert Mueller) by illegally leaking his memos to The New York Times. The stink of corruption just reeks from every pore of this entire national disgrace!

And make no mistake: Any argument that James Comey is the pillar of ethical integrity and professionalism the fake news media portray him to be, went out the window with the launch of his self-aggrandizing, bitter, and petty book tour. In “A Higher Loyalty,” Comey tries to present himself as a champion of morality, ethics, leadership, and truth knocked down by a horrible, immoral, and dishonest President. It was supposed to be a “blockbuster” that would be the beginning of the end of President Trump. Instead, it was a dud that presented not one new fact or piece of evidence that there was every any Russian “collusion” or “obstruction of justice.”

What his book and nauseating book tour HAVE proved is that, while he is tall in stature (6 foot, 8 inches), Jim Comey is in truth a small, little man.
Here is just a partial list of what we’ve “learned” thus far from Comey’s book tour:

** Comey has admitted that he made his October 2016 press conference alerting the world that Hillary Clinton was still under FBI investigation because he thought “she’s gonna be elected President, and if I hide this from the American people, she’ll be (considered) illegitimate the moment she’s elected, the moment this comes out”. In other words, he was trying to shield a future President Clinton. !

** Comey declared “you must tell the truth” or “the rule of law breaks down.” Well on that we agree – and his repeated lies prove his point!

** Comey said he didn’t tell President Trump that the Steele Dossier (which among other things accused him of doing deviant things with Russian prostitutes) was bought-and-paid-for by Hillary Clinton because he didn’t think it was “material.” Seems pretty material to me where that document came from!

So much for being a pillar of integrity and professionalism!

** Comey admitted that, “I didn’t take a poll among all the kids, but I am pretty sure at least my four daughters, probably all five of my kids, wanted Hillary Clinton to be the first woman President. There was a lot of passion in this house for Hillary Clinton.” His wife said she was “devastated” when Hillary lost. And Comey bragged that his wife and daughters attended the hate-filled, radical left Women’s March a day after President Trump’s Inauguration. So much for fake news media reports Comey is a Republican!

** Comey guessed the Russians may have something on President Trump and that President Trump may have done terrible things with Russian prostitutes but had no proof whatsoever on those charges or anything else against the President.

At the start of the interview, Comey told Stephanopoulos he wrote his book because he wanted to be “useful” and because he wanted to show “people, especially young people” what “leadership should look like and how it should be centered on values.” Well, I think it is pretty clear why Comey REALLY wrote the book: To get even with President Trump for firing him and to, of course, make money.

Comey also told Stephanopoulos that President Trump was going to cause America “tremendous damage” before his Presidency is over. (Obama already did that and Trump is trying to restore our great nation, but the media won’t report any of his successes.)

Well, the President’s legacy is a work in progress. . . but with his book tour, James Comey’s is not. It is a completed work. The one who broke the law and caused America “tremendous damage” is NOT President Trump. It is none other than James Comey who has helped truly divide the nation in a battle that will leave a deep wound that could take a generation or more to heal over.
This prediction has sadly come painfully true. We see this anti-Trump hysteria 24/7 on the TV news, on the internet and social media, on network and cable TV, in our newspapers, and on our college campuses.

P.S. When President Trump learned that the home and office of his personal attorney was raided by the FBI, he rightly declared the act “disgraceful” and “an attack on what we all stand for.” He also called the raid a “whole new level of unfairness.” He is right! And now, it’s time to fight back against the deep state and hold those accountable for the mess the crimes they have committed in their zest to take down this President. .. starting with the man who helped start it all – James Comey!

Meanwhile, Comey, whom Trump fired in 2017 after less than four months in the White House, said on NBC’s “Meet the Press” that it might not be wise for Trump to agree to an interview with Special Counsel Robert Mueller in his investigation. “I have serious doubts about his credibility,” Comey said of the president.

“Sometimes people who have serious credibility problems can tell the truth when they realize that the consequences of not telling the truth in an interview or in the grand jury would be dire,” Comey said. “But you’d have to go in with a healthy sense that he might lie to you.”

Sounds like he is speaking from experience. He and Hillary are the ones with serious credibility problems, not Trump. There is talk that if Trump doesn’t appear before Mueller he may subpoena him.  If they issue a subpoena for Trump that would be unprecedented. The president seized on the report, saying on Twitter it shows the investigation is “a big Hoax by the Democrats based on payments and lies. Which it is. 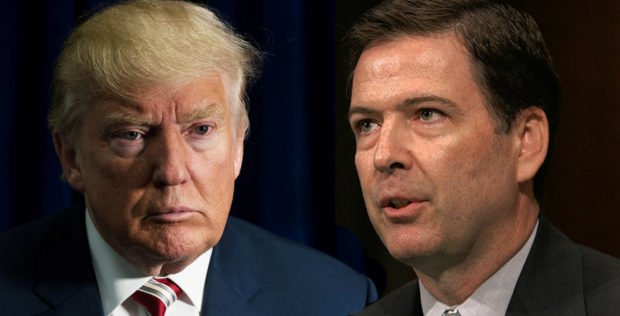 Support Conservative Daily News with a small donation via Paypal or credit card that will go towards supporting the news and commentary you've come to appreciate.
Tags
James Comey