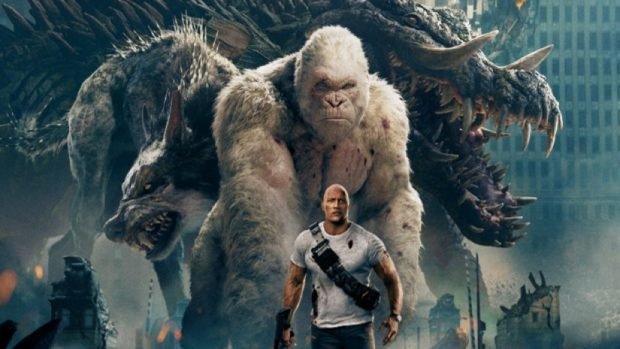 Rampage is the latest film with Dwayne (The Rock) Johnson and it is an exciting, thrilling and fun escapism type of movie. You can never go wrong with a Dwayne Johnson film. Here he plays a primatologist named Davis Okoya who keeps people at a distance who has bonded with a white Gorilla named George whom he rescued when he was two years old when his family was killed by poachers. George lives with other rescued animals on a San Diego wildlife preserve. George and Davis communicate quite frequently and proficiently through sign language.

Meanwhile, in 1998 a science lab was dealing with mutant microorganisms in space to conquer diseases but was discontinued in 2016 to turn the experiments into weapons of mass destruction. When the space station explodes in space it sends canisters containing the organisms down to the preserve area and they infect George, a wolf and a crocodile to gargantuan size. George is at least 20 feet tall and the wolf is 30 feet tall and the crocodile is huge and bigger than both of them and gives Godzilla a run for its’ money. All three are invincible and impervious to any machine gun fire of any military kind. The three battle it out in Chicago destroying buildings, crashing through buildings and on top of one another.  As the mutated beasts embark on a path of destruction, Okoye teams up with a discredited genetic engineer Dr. Kate Caldwell (Naomie Harris), who explains that the pathogen was developed by a company called Energyne to rewrite genes on a massive scale and the military to secure an antidote and prevent a global catastrophe. She had hoped to advance CRISPR research as a potential cure for the disease but discovered that Energyne planned to use it as a biological weapon. The company fired her and sent her to prison for attempting to expose them.

Meanwhile, George escapes from captivity and goes on a rampage at the preserve. Davis calms him down, but George is captured by a government team led by Agent Harvey Russell and is put on an airplane. Meanwhile,  Energyne CEO Claire Wyden and her brother, Brett, send a squad of mercenaries led by Burke to capture the mutated wolf named Ralph, but they are all killed.

Claire, hoping to capture Ralph and use George to kill Kate so they can cover up their plans, uses a massive transmitter atop the Willis Tower to lure the animals, who have been engineered to respond aggressively to a certain sound frequency, to Chicago.

There are plenty of realistic action sequences the CGI of the creatures is very real and is getting more so as each new picture comes out. Dwayne Johnson has plenty of one line zingers too as when the wolf spreads its’ skin to reveal wing-like appendages, Okoya says sarcastically and surprised at the same time, “of course, the wolf has wings.”

When some mercenary guys fully loaded with guns and ammo are flown into the wildlife area one says, “What’s it like down there?” to which his partner says, “Just vegetation and animals, you’ll fit right in.”

If fun, action sequences and escapism with Dwayne Johnson and huge monsters is to your liking then I would suggest Rampage. Check out the exciting trailer below.

Support Conservative Daily News with a small donation via Paypal or credit card that will go towards supporting the news and commentary you've come to appreciate.
Tags
Movie Review movie trailer Rampage