“Despite what you might hear from the talking heads in the media, this administration is 100% committed to building a wall along the southern border of the United States of America,” he wrote in an email. “Now liberals in the Senate need to hear that YOU, the American people, are ALSO 100% committed to seeing that critical wall built along the border.”

The email points to a page on the GOP.com website with the headline “Official Petition for Congress to Fund Trump’s Wall.”

The page features a sign-up form that says, “President Trump ordered the construction of a wall along our border with Mexico. Now it’s time for YOU — the grassroots voters of America — to speak up.”

A similar page is hosted on the Donald J. Trump campaign website with the headline of “Tell the Senate: BUILD THE WALL.” 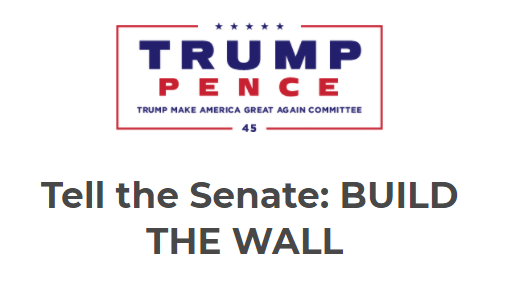 Members of the Senate have pressed the president to accept a DACA/border security bill that falls short of fixing chain migration and the visa lottery which he rejected.

Support Conservative Daily News with a small donation via Paypal or credit card that will go towards supporting the news and commentary you've come to appreciate.
Tags
Illegal immigration Mike Pence The Border Wall