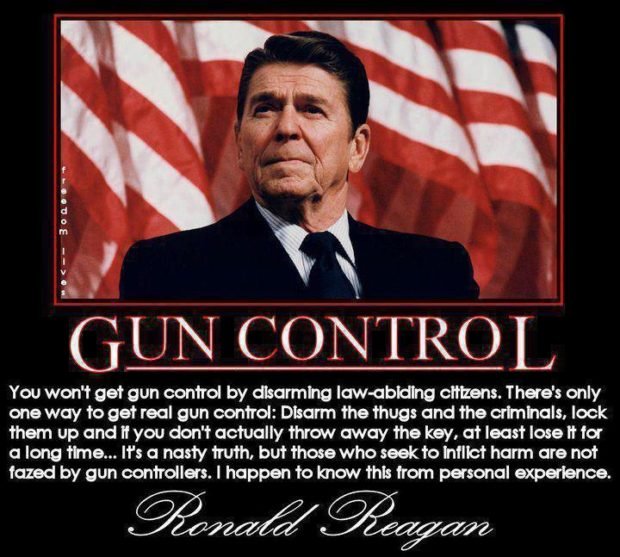 And who really is responsible for any one person carrying a gun? Surely it is impossible that it is them.—Bob Dylan 1967.

Everybody’s shouting which side are you on?—Bob Dylan. Gates of Eden,1969.

Whenever a tragedy like what happened in Florida takes place the left always shouts “more gun control.”  They never offer any concrete solutions to what type of gun control.  What do they want, that  government confiscate all guns like Hitler did in Nazi Germany before he rounded up everyone that didn’t comply with the Nazi movement?

There are already over 100  gun laws on the books now that cover vast requirements to own a gun so how many more do we need?  Now these media people and late night comedians/hosts like Jimmy Kimmel, Stephen Colbert and others are blaming Trump for revoking Obama’s gun law in February 2017, repealing an Obama-era rule to strengthen the federal gun background check system after the 2012 shooting of 20 young students and six staff at Sandy Hook Elementary School in Newtown, Conn.

There are laws in the United States regarding the sale of weapons to some mentally ill individuals. It is unlawful to sell a firearm to a person who “has been adjudicated as a mental defective” or “has been committed to any mental institution.”

Obama’s regulation would also have required the Social Security Administration to send the names of some people unable to manage their disability benefits because of mental impairments to the criminal background check system database.

Those people, estimated to number around 75,000, could have been prevented from owning or purchasing a firearm and may have been forced to prove why they were competent enough to do so, opponents of the regulation argued.

Those opposed, not surprisingly, included the gun lobby group the National Rifle Association. But on this particular issue, Trump also had backing from an organization usually highly critical of him: The American Civil Liberties Union.

In a blog post last year, the ACLU said that while it does not oppose gun control laws, those laws need to be be fair and not based on prejudice and stereotype.

Thousands of Americans whose disability benefits are managed by someone else range from young people with depression and financial inexperience to older adults with Down syndrome needing help with a limited budget, the ACLU wrote.

“But no data — none — show that these individuals have a propensity for violence in general or gun violence in particular,” the ACLU said.

This is one of the most misunderstood policies in modern politics.

This policy was taking people who either were receiving benefits for mental issues (including non-violent issues like ADHD) or were using a designated beneficiary to handle their benefits, and classifying them as “mentally defective” thus taking away their right to purchase or own firearms.

This did not involve any psychiatrists deciding that the people were a danger to themselves or others, and there was no due process. If you had your rights taken away in this manner, you’d have to file an appeal and try to persuade an administrative board (NOT a court of law) that you are actually sane.

Even the ACLU opposed this policy. When the ACLU and the NRA both agree it’s a bad policy, you should pay attention.

For the record- gun owners as a whole understand that there are people who should NOT be armed, and they support efforts to ensure they don’t get access to guns. But those efforts must not be blanket policies that ensnare hundreds of thousands of people who simply fit a category. Those efforts must be based either on a psychiatrist determining that the person is a danger to themselves or others, or a court of law ruling that the person is unfit to own firearms.

Another thing Trump is doing with revoking Obama’s law is turning laws over to the states. Florida already has laws on the books disallowing people with mental illness for purchasing guns. Cruz passed all the requirements to own a gun so you can’t start shouting more gun laws like the left always does.

The only ones who obey gun laws are the law abiding citizens. If criminals want to purchase a gun they have ways like gangs, the dark web or black market or overseas. A person could be mentally ill and not diagnosed as such probably like Cruz was and seem like a normal person without any background notes to say they are mentally ill and still be able to purchase a gun.

When the argument for more gun control doesn’t work the next object is to blame the NRA. The New York Daily News which has turned into a daily rag sheet is now saying Cruz was trained by the NRA in a bombastic misleading headline

The Daily News cited an Associated Press report in its misleading article, but without providing additional context that undercuts the idea that Cruz was “trained” by the NRA.

JROTC programs operate in more than 1,700 high schools across the U.S. and are sponsored by the U.S. Army rather than the NRA.

The Daily News report, and others published by left-leaning news outlets, also avoids mentioning the FBI’s admission on Friday that the bureau failed to act on a tip last month from someone who said that Cruz had expressed a “desire to kill people.”

“He was a very good shot,” Aaron Diener, a teammate of Cruz’s in the marksmanship program, told the Associated Press.

According to the Associated Press, the NRA Foundation gave $2.2 million in cash and non-cash grants to schools in 2016.

Most of the grants — $1.8 million worth — were in-kind donations of “equipment for high school air rifle teams to gun safety programs for younger children.”

Stoneman Douglas received a $10,827 non-cash grant as part of the program, according to the AP.

There is no evidence that the NRA provided marksmanship training to Cruz or any other JROTC members.

Some of the grants provided to Stoneman Douglas’ program were used to purchase bulletproof Kevlar curtains that were used to protect students during Cruz’s rampage.

As the AP reported:

Colton Haab, a second lieutenant and platoon leader in the school’s JROTC, told The Associated Press that he helped usher about 90 students into the room where cadets train with pellet rifles. Haab moved the Kevlar sheets used as a backdrop for target practice away from the wall and told everyone to hide behind them. As it was, the shooter never approached the ROTC rooms.

“So I think the NRA actually bonused us in a way,” Haab told the AP.