Now that Sunday’s conference title games have been played and the Super Bowl matchup set, the NFL is one game away from having this miserable season of racial grievance and recriminations limp to an end.

It was a year marred by controversy as the league chose to alienate millions of fans by siding with the multimillionaire malcontents who decided to make an anti-Trump, anti-American political statement by kneeling or sitting while the national anthem was played.

None other than Commissioner Roger Goodell himself implicitly sanctioned the protesters in a scathing statement condemning President Trump over:

“Divisive comments like these demonstrate an unfortunate lack of respect for the NFL, our great game and all of our players, and a failure to understand the overwhelming force for good our clubs and players represent in our communities.”

Once Goodell had released that statement prior to the week three games, hundreds of black players engaged in their protests. It was the league’s seal of approval and although it would lead to falling ratings, it was at least an unofficial part of the NFL policy to tacitly encourage the disrespect to the flag and to the military.

It hasn’t ended yet.

A patriotic advertisement that a veteran’s organization had hoped to have included in this year’s official Super Bowl game program was rejected because of its pro-American message.

NFL rejects an advertisement for its official Super Bowl LII programs that urged players and people who attend the game to stand during the National Anthem, according to American Veterans, the organization that submitted the ad. https://t.co/a6d4uUjqym

Via Stars and Stripes “NFL rejects Super Bowl ad from veterans group that asks players to stand during anthem”:

The National Football League rejected an advertisement for its official Super Bowl LII programs that urged players and people who attend the game to stand during the National Anthem, according to American Veterans, the organization that submitted the ad.

Omitted from the programs was a full-page ad picturing the American flag, saluting soldiers and the words “Please Stand,” referring to the movement of NFL players protesting racial inequality and injustice by kneeling during the performance of the National Anthem before the start of games.

Outcry over the protests surged last fall when President Donald Trump criticized the NFL for allowing it to continue. In October, NFL Commissioner Roger Goodell and NFL owners decided the league wouldn’t penalize players for kneeling.

Joe Chenelly, the national director of American Veterans, known as AMVETS, said Monday that the group was “surprised and disappointed” when the NFL told him Friday the league had rejected the ad.

“The NFL said it does not want to take a position on that,” Chenelly said. “Really, by not letting us run an ad, we think they are taking a position.”

He noted an ad from Veterans of Foreign Wars was approved for the program. It reads, “We Stand For Veterans.”

Production on the programs was delayed while they awaited an answer from AMVETS, McCarthy said, and the NFL ultimately printed the programs without the ad in order to meet deadlines.

Chenelly disputes the NFL didn’t heard back from AMVETS in time for printing. He said the group responded to the league that changing the words on their ad would mean abandoning their message.

AMVETS, an organization comprising approximately 250,000 veterans and 1,400 posts nationwide, sent a letter to Goodell on Monday calling the decision to exclude their ad an affront to free speech.

“Freedom of speech works both ways. We respect the rights of those who choose to protest, as these rights are precisely what our members have fought — and in many cases died — for,” wrote National Commander Marion Polk. “But imposing corporate censorship to deny that same right to those veterans who have secured it for us all is reprehensible.”

The NFL not a place for political messaging? What in the hell does McCarthy believe has been taking place on his league’s sidelines all year and by refusing to require players to stand, the NFL has engaged in promoting their political message.

This is just another reason to not only boycott the Super Bowl but to spend the offseason promoting a national unity campaign to boycott next season’s games as well unless the league formally makes it a rule that players stand during the playing of the Star-Spangled Banner. 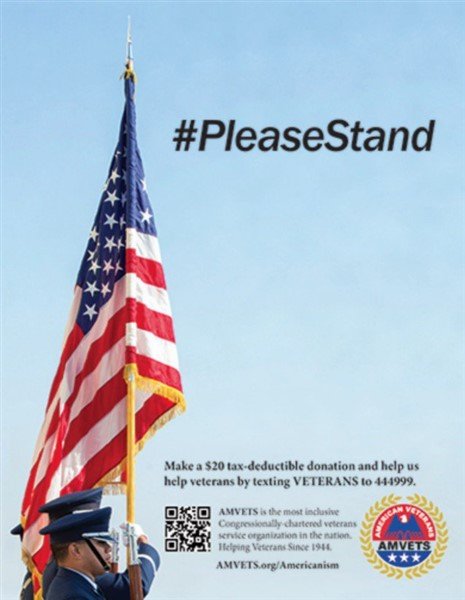 Support Conservative Daily News with a small donation via Paypal or credit card that will go towards supporting the news and commentary you've come to appreciate.
Tags
AMVETS NFL NFL Protests Roger Goodell Sports The NFL the Super Bowl

‘Why Didn’t Newsom Mention This?’: DeSantis Fires Back On Attack Ads