The House of Representatives filed H.R. 1, their version of tax reform, on Thursday that included tax cuts for businesses, business owners, and middle-income families, but the Republicans stopped short of what would truly have been a generational tax reform.

House Speaker Paul Ryan told reporters Tuesday that the bill would lower the tax bill of median-income Americans by about $1,182. This, combined with the expected $4,100 increase in annual wages due to the corporate rate cut are of substantial benefit to those in the middle tax brackets.

In general, the bill provides for four tax brackets (five if you count the 0% paid by low-income families) at 12%, 25%, 35% and 39.6%. The mortgage interest deduction is capped at a property value of $500,000, the property tax deduction is capped at $10,000. Property taxes are deductible under the plan, but not income taxes. The Senate version of the bill elimates state and local taxes completely.

“I view the elimination of the deduction as a geographic redistribution of wealth, picking winners and losers,” Rep. Lee Zeldin (R-NY) said. “I don’t want my home state to be a loser, and that really shouldn’t come as any surprise.”

Zeldin’s argument is more correctly made the other way. Taxpayers in low income-tax states have been subsidizing those states that have high taxes. New York is a prime example of a state unable to control spending and instead taxing residents at ridiculous rates. Take two employees, one in Texas and one in New York. Texas has no income tax and New York has rates from 4%-8.82%. Most middle-income earners would pay between 6% and 7% in New York and then get a deduction on the federal taxes of the same amount. In Texas, the same earners would pay nothing in state income taxes and then get no deduction on their federal return. So Texans, of equal income, pay more in federal taxes than New Yorkers. Seems a bit like redistribution Rep. Zeldin, doesn’t it?

The tax reform bill also nearly doubles the personal exemption amount from $6,300 for individuals and $12,600 for married couples to $12,000 for individuals and $24,000 for those filing jointly. Those that use the $4,050 personal exemption for themselves, spouse and children, that has been eliminated. For a family of four that files jointly, their exemptions go from $16,200 to $24,000. 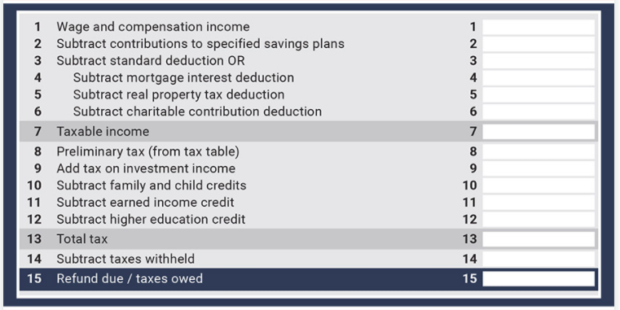 How the tax brackets break-out

The largest relief for middle-income earners comes two-fold through the rate reduction and higher personal deduction amount. Married couples making less than $90,000 in 2018 will pay 12% in taxes on any earnings over $24,000. If that same couple had made between $37,650 and $91,150 under the current system, they would have been placed in the 25% tax bracket.

Just evaluating the standard deduction increase means that individuals making less than $12,000 and married couples making under $24,000 will own zero taxes. Once the family/child credits are added in, a gross income of $55,000 or more could still yield a zero dollar tax bill for the same family depending on their situation.

The pass-through rate is capped at 25% under the plan. Pass-through income is business income that is reported on the owner’s individual taxes and is usually taxed at filer’s tax rate. Anyone making less than $90,000 in pass-through income would see no advantage to the top rate – they would just pay their personal rate of 12% which will likely be less than they pay today.

Owners that pull in $200,000 or more in pass-thru income will see relief as they will pay at the 25% rate instead of their personal 35% rate.

No longer taxed at Death

The estate tax, which creates a taxable event when a person dies, is dead. Essentially a double-tax, the estate tax made it difficult for small family-owned businesses to pass those assets on to family members as the tax bill was often unaffordable.

The corporate rate is set at 20%, down from 35% making American companies competitive with their foreign counterparts.

Cash held overseas by American-based companies could come flooding back. The tax reform bill sets the tax rate at 12% for money coming back to the United States versus the 35% rate those companies would currently pay.

This cash will likely be re-invested in those companies creating more jobs in the U.S.

Speaking of brackets, the tax reform bill adds the terrible fourth bracket that I warned about HERE. The top income bracket will stay at 39.6% bowing to the class-warfare tactics from the left. Without relief, those making the most money will be forced to continue sheltering it away from the economy as they have been. Lowering the top rate gives the wealthiest Americans incentive to put the money to work by investing it in existing businesses, starting new ones or just spending it on goods and services in the economy. This is the glaring weakness in the House plan and the one that will prevent it from spurring the economy to the level that Reagan’s reforms did. Don’t get me wrong, it will still push GDP over 3%, but pulling the top rate to 28-30% could have seen GDP rocket to 5% or more.

Graduate students are sometimes given tuition waivers as compensation for assisting with research or performing teaching duties. These waivers allow the students to complete their masters or doctoral degrees at low or no cost to the student. The House version of the tax bill, these waivers are treated as income. Waivers can be valued at $50,000 or more per year depending on the institution. When treated as income for the purpose of taxation, a graduate student who may have little-to-no actual income could end up with a year-end tax bill. The Senate version of tax reform allows for the continued deduction of tuition waivers and the deduction is likely to make it to the final, conference committee version.

Effect on the National Debt

Suddenly, Democrats are concerned about deficit spending. The Congressional Budget Office (CBO) uses static analysis, which assumes that the tax cuts will change nothing in the economy, to determine the cost or benefit of a proposal. Using this flawed approach, the CBO expected the tax cuts to add $1.5 trillion to the debt.

Dynamic analysis, which would consider the economic growth and its positive effects on tax revenue, would likely have shown that by reducing taxes, the resultant activity would reduce the debt if Congress could refrain from spending the proceeds.

Support Conservative Daily News with a small donation via Paypal or credit card that will go towards supporting the news and commentary you've come to appreciate.
Tags
H.R. 1 tax reform the U.S. House of Representatives Trump Administration