Vanessa Rivera helped establish and lead a Conservative women’s group, the Network of Enlightened Women, at a Florida university and she is helping young women realize that they have a place, they are strong and they are not the people the mainstream media and liberal elites would have Americans believe. Venessa’s recent blog post is empowering and a true show of leadership in the fight against the liberal takeover of America’s youth. 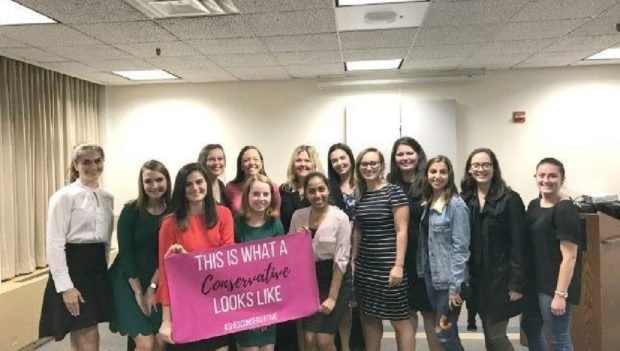 Why shouldn’t I be a proud conservative woman? I have found a political ideology which aligns with my personal beliefs as well as my religious beliefs. The beliefs I have known and held true for the past 22 years are the same truths which have brought prosperity and growth to the nation we call America.

I wasn’t born into a completely conservative household, but I consider that a blessing. Being able to see two ideologies and discuss and debate issues that affect the lives of millions of Americans exposed my siblings and me to the reality of politics.

In retrospect, when I first stepped foot on the campus of Florida Gulf Coast University, it was a whole new world. Not only did it seem like everyone was a liberal, but it was as if I was wrong for not being a liberal as well.

Immediately, my peers pointed out that I am a minority and that as a minority I cannot possibly be a conservative. In the eyes of the Left, if you are a woman or minority, you are expected to be a liberal and a victim. To be a conservative, Latina millennial was strange to my professors as well as my classmates. Instead of getting to know my beliefs and why I stand by them, I was called a woman-hater, brainwashed, and a sell-out. Because I didn’t accept the role of a victim, my beliefs were automatically discredited

According to the liberal agenda I should be playing the victim card. Even in 2017, the narrative being pushed down the throats of women, minorities, and millennials is that you’re a victim and that there is nothing you can do about it.

I am not sure if the Left has forgotten the progress Americans fought for with blood, sweat, and tears, but every U.S. suffrage and civil rights movement becomes completely invalid when we play the victim card. America was founded, molded, and built by people who wanted freedom, equality, and opportunity. To this day there are people still coming to America for those exact same ideals. They could easily choose to play the victim in their country of origin, but they do not. First, because they could lose their life doing so and, second, because they are willing to work towards a life where they are no longer the victim.

According to the media, being a Latina millennial means the odds are not in your favor. I, a Latina millennial, graduated from a four-year university and am employed right after graduating. I don’t think I “beat the odds,” however. I think I beat the liberal agenda.

I could have easily done what many do and just go with the tide at school. Instead, I chose to stand up for my beliefs and make a difference. I stood up for my beliefs by joining conservative organizations. I eventually went on to start a Network of Enlightened Women, or NeW, chapter on my campus. I realized that other proud conservative women wanted to discuss issues and policy and needed a network of support. I quickly found that there were many conservative women on campus who had experienced the same situations I had. The simple existence of these women didn’t fit the narrative.

Although I was the president of my NeW chapter for only one year, I saw so much personal and professional growth within my members, and I cannot be anything but proud. Their determination to not be victims of society’s rules and to exceed society’s standards for women is what sets them apart. It is what has led them to succeed in breaking glass ceilings.