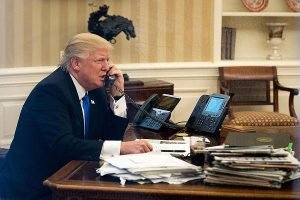 President Donald Trump called Senate Minority Leader Chuck Schumer Friday to see if Democrats would be willing to work out a deal to replace Obama’s failing healthcare law. Schumer (D-NY) told him that doing so is “off the table.”

Americans are suffering under the oppressive premium increases and terrible healthcare plans Obamacare has thrust upon them. Families have had to switch to doctors they don’t want and pay premiums they can’t afford just to get deductibles so high they end up paying out-of-pocket for just about everything – basically its expensive insurance that doesn’t work. The House of Representatives passed a replacement bill earlier this year but the Senate has been unable to get anything done on health care. Therefore, President Trump offered Democrats a chance to fix their awful health care plan.

Mr. Trump said he asked Schumer if Democrats “want to do a great health care bill,” because Obamacare is “badly broken.”

I called Chuck Schumer yesterday to see if the Dems want to do a great HealthCare Bill. ObamaCare is badly broken, big premiums. Who knows!

But Democrats aren’t open to cooperating on health care, something Schumer said he made clear to the president. “I told the president that’s off the table,” Schumer told reporters.

Schumer, beholden to his progressive New Yorker base and a rising tide of far-left extremist groups, cannot be seen cooperating with the president on anything lest he is seen as failing the #resist everything movement. Spinning the conversation to appear willing to work with Republicans, Schumer told reports that he told Trump “If he wants to work together to improve the existing health care system, we Democrats are open to his suggestions.” Whatever the heck that means…

Progressive groups, like Indivisible, are leading Democrats off a liberal cliff according to a report in The New York Times:

“It’s not a secret that we would like to move the Democratic Party further left,” she said, adding that “the party will only get to where it needs to go if it has groups like ours pushing them to do the right thing.” She cited her group’s aggressive opposition to Republicans’ initial efforts to repeal the Affordable Care Act at a time when she said Democratic congressional leaders “didn’t really have a strategy.”

Democrats refusal to participate in a bi-partisan replacement of Obamacare will likely lead the president to give up on the effort until reconciliation allows a 50-vote threshold to pass a Republican-led effort in January.

While Trump held out a hand in the spirit of cooperation, Democrats swatted it away leaving in-place the worst thing to happen to healthcare in U.S. history.

Support Conservative Daily News with a small donation via Paypal or credit card that will go towards supporting the news and commentary you've come to appreciate.
Tags
Chuck Schumer Obamacare Obamacare repeal Politics