Can this world get any crazier? Liberals seemingly find racism in everything from trash and craft supplies to children’s books and now… shoelaces.

First, it was a piece of plastic wrap at the University of Maryland, when a student saw a piece of plastic wrap lying on the ground and she said it looked like a noose and screamed racism. Then a customer walked into a Hobby Lobby, saw a cotton ball and screamed racism because it reminded her of slaves picking cotton. Last week, an elementary school librarian rejected First Lady Melania Trump’s offer of free books because Dr. Seuss books are filled with “racist propaganda.”

Now Michigan State University is stepping up the “everything is racist” game. MSU President Lou Anna K. Simon released a statement Wednesday morning saying she was “distressed” after finding out “a student reported a noose was hung outside of her room.” Simon commended the student’s “courage” for reporting the “racial incident” and put out a clear message. “This type of behavior is not tolerated on our campus,” Simon said. “No Spartan should ever feel targeted based on their race, or other ways in which they identify.”

So the MSU Police were called in to investigate this terrible, terrible, terrible incident. But what did they find after their painstaking investigation? They found “the object was a packaged leather shoelace and not a noose.”  The original shoelace found inside the residence hall was not directed at any individual,” the police believe someone found the shoelace and put it on a stairwell door handle after picking it up off the floor.

Liberals see a racist behind every tree. Ann Coulter was 100% right when she said: “There are only two groups that are obsessed with race: Skinheads and Liberals.”  I’m afraid that it is going to get worse before it gets better. 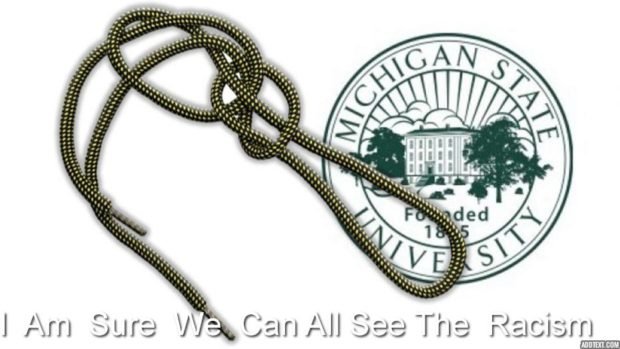 Support Conservative Daily News with a small donation via Paypal or credit card that will go towards supporting the news and commentary you've come to appreciate.
Tags
Ann Coulter MSU Police Politics University of Maryland