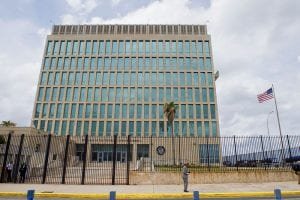 The U.S. Department of State is pulling the majority of its diplomatic personnel from the American Embassy in Havana and warning Americans not to visit Cuba after at least 21 U.S. citizens stationed there were mysteriously injured.

The State Department is sending all non-essential staff out of the Cuba leaving only “emergency personnel” which will halt all visa processing.

The department is also issuing a travel warning, urging Americans to stay away from the Carribean island nation out of fear that they could become targets as some of the attacks had happened at hotels.

The injuries resulting from what department officials refer to as “targeted attacks” range from hearing loss to cognitive issues and sleeping disorders. U.S. officials blame “sonic attacks” for the neurologic symptoms expressed by those affected.

Cuba denies having anything to do with the attacks and almost a year after the first complaints, U.S. investigators have been unable to determine who or what is causing the injuries.

Cuban Foreign Minister Bruno Rodriguez met with Secretary of State Rex Tillerson Tuesday where he was told that “independent of who is doing it, the Cubans have a responsibility for the safety and well-being of our people.”

The reduction in staffing comes at a pivotal time in Cuba as Raul Castro is expected to step down as the nation’s leader when his current five-year term ends in early 2018.

Support Conservative Daily News with a small donation via Paypal or credit card that will go towards supporting the news and commentary you've come to appreciate.
Tags
Cuba Raul Castro