Once again the leader of North Korea, Kim Jung-un, is saber rattling by claiming they have a hydrogen bomb that can be mounted on a missile and is threatening a high altitude nuclear explosion that experts say could wipe out a city. North Korea detonated hydrogen bomb sparking powerful 6.3 magnitude quake.  The blast directly ordered by Kim Jong-Un and was large enough to destroy a city.

Trump responded in a series of tweets on Sunday that: ‘I will be meeting General Kelly, General Mattis and other military leaders at the White House to discuss North Korea. Thank you.”  Trump also responded saying,  “Appeasement won’t work and they (North Korea) only understand one  thing.”

Trump is right about Kim only understanding one thing. This is a guy who carries out public executions in stadiums with people who dissent from him. He killed his own uncle with an anti-aircraft gun in a public execution that way. He starves and tortures his own people. The only thing he knows is force.

Trump went on to tweet that “The United States is considering, in addition to other options, stopping all trade with any country doing business with North Korea.’

That’s likely a veiled threat to China, which provides 85 per cent of North Korea’s imports, and buys 83 per cent of its exports.

“We are not looking to the total annihilation of a country, namely North Korea,” Defense Secretary James Mattis told reporters Sunday afternoon. Mattis then relayed that the president requested and was briefed on the range of military options for the rogue nation.

Sanctions against anyone dealing with North Korea would hit many countries hard – particularly China, which accounts for 83 per cent of North Korean exports and 85 per cent of imports, according to the Office of Economic Complexity.

It’s entirely possible that Trump’s remarks were made to pressure the country – North Korea’s only ally – into renewing efforts to rein Kim in.

But refusing to do business with China would in turn cause huge damage to US companies that have invested in, or sell products to, in the country.

The most prominent of those, of course, is Apple, which manufactures its electronics in China. It has also invested heavily in tech there, including pumping $1 billion into ride-share app Didi Chuxing last year.

But a string of other American businesses have huge investments in the country, including Walmart, KFC and McDonald’s – all of which are popular there.

In 2016, trade with China – America’s largest good trading partner – totaled an estimated  $648.2 billion, according to the Office of the United States Trade Representative

All North Korea has to do is to send a warship into international waters, fire a missile with an atomic warhead in it triggered to explode 100 miles above the United States and the resultant electo-magnetic pulse (EMP) would be strong enough to shut down the power grid creating chaos and the fallout would kill or sicken many more. 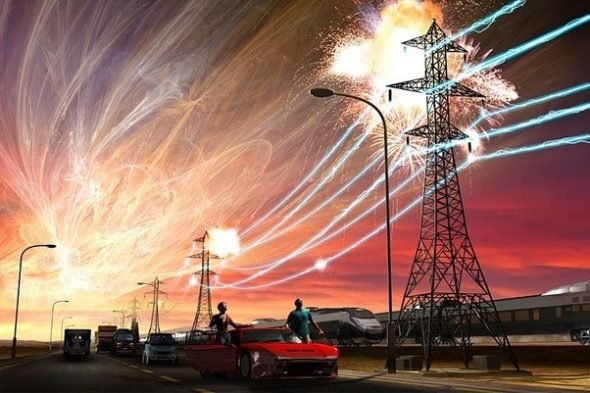 North Korea is boasting that all of the components of their new weapon are homemade thus enabling the country to produce as many weapons as it wants without worrying about import sanctions.

North Korea is thought to have a handful of rudimentary nuclear bombs and has spent decades trying to perfect a long range multi stage missile to carry smaller versions of those bombs, but it’s impossible to ascertain North Korean statements about its’ highly secretive weapons program.

In any event, Kim must be stopped, before he attacks the US or anyone else.

Support Conservative Daily News with a small donation via Paypal or credit card that will go towards supporting the news and commentary you've come to appreciate.
Tags
Kim Jong-un North Korea