The Caribbean island of Puerto Rico took a direct hit by the latest monster hurricane on Wednesday when Maria roared ashore as a Category Four force of nature.

By the time that Maria moved on, there was total devastation in its wake which is still being assessed as of Thursday as the storm moves on, rapidly regaining strength.

All of Puerto Rico is now without power and it could stay that way for quite some time, contributing to what is already a humanitarian disaster.

While the winds will abate, there will continue to be heavy rains and flooding. Predictions have up to two-feet of rain falling by Friday.

JUST IN: Puerto Rico could be without power for 6 months, San Juan mayor warns https://t.co/ulfE8nkr0Q pic.twitter.com/IKgNlcryFA

Via The Hill “Officials warn Puerto Rico could be without power for 6 months”:

Puerto Rico could be without electricity for up to six months following Hurricane Maria, the mayor of the island’s largest city warns.

San Juan Mayor Carmen Yulín Cruz told MSNBC on Thursday that the U.S. territory’s 3.5 million people are “looking at four to six months without electricity” after Maria, a Category 4 storm, swept across the island yesterday.

“The San Juan that we knew yesterday is no longer there,” she added.

A spokesman for Gov. Ricardo Rosselló said Wednesday that “we are 100 percent without power” following Maria. Officials said that the storm, the strongest to hit Puerto Rico in decades, devastated communities there, with more than 90 percent of homes destroyed in some areas.

"The Puerto Rico and the San Juan that we knew yesterday is no longer there," San Juan's mayor tells @GadiNBC as she fights back tears. pic.twitter.com/M4yL7hHWe5

President Donald Trump issued a declaration of disaster on Thursday morning which should speed aid to the beleaguered U.S. territory.

According to the latest tracking provided by the National Hurricane Center, the storm does not appear that it will be a threat to the U.S. mainland but you can never sleep on these things, tracks change rapidly as Florida just found out with Hurricane Irma. 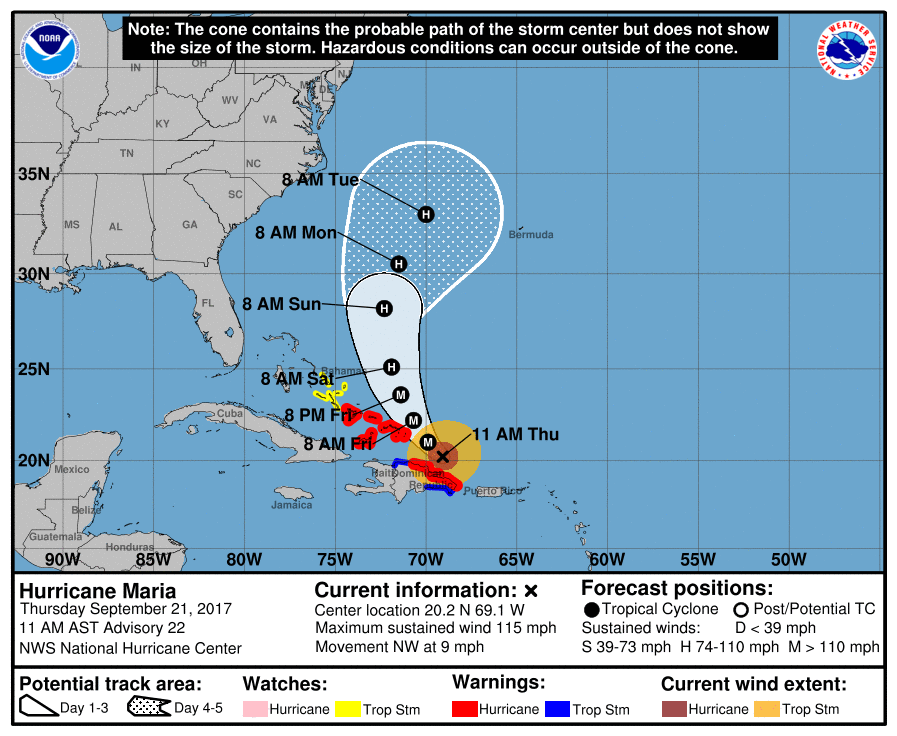 Support Conservative Daily News with a small donation via Paypal or credit card that will go towards supporting the news and commentary you've come to appreciate.
Tags
Hurricane Maria Puerto Rico