Irma, already a strong category five hurricane, is expected to strike the British Virgin Islands Tuesday evening, skirt Puerto Rico Wednesday afternoon,  and continue on a track very likely to heavily impact south Florida this weekend as a major Hurricane. Florida Keys officials have ordered a mandatory evacuation of residents and visitors, southern Florida towns and cities may not be far behind.

“If ever there was a storm to take seriously in the Keys, this is it,” said Martin Senterfitt, the emergency management director for Monroe County, which covers the Florida Keys, a popular tourist destination. “The sooner people leave, the better.”

Visitors are to begin evacuating the Keys Wednesday morning and residents are ordered to leave beginning at 7 pm Wednesday. 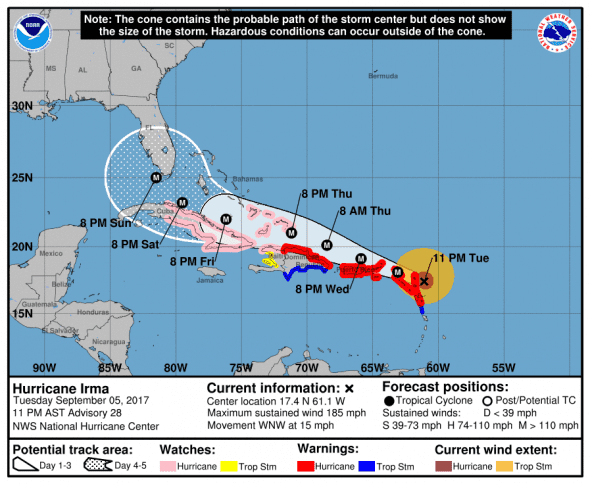 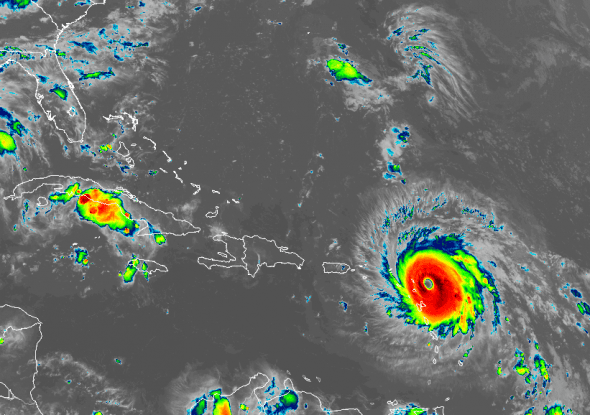 Irma is a very strong category five storm but is expected to weaken to a category four hurricane with 140 mph winds over the next 5 days as it skirts Puerto Rico and Cuba before landfall in Florida.

Computer models show a slight move eastward for Irma since the last update. Late cycle model consensus from the 2 pm EDT run indicate a Southeast Florida landfall while early cycle models from the 8 pm run show the storm just barely missing West Palm Beach. The NWS is thinking the storm will hit the southwest part of Florida so it appears that Irma has set her sights on the sunshine state, but we don’t know which beach she’s planning to visit first.

Early cycle models complete in less than 30 minutes offering new information to forecasters but using less complicated models with less information. They may not be as exact, but they are more timely.

Comparing the early cycle models to the NWS forecast (top of page) it appears that the National Weather Service is giving serious consideration to the SHIP (statistical hurricane intensity prediction scheme) model as both the reliable GFS (labeled AEMI) and HWF (HWFI) have a more easterly track impacting Florida. They also don’t show a landfall in Cuba. (which now the NWS had abandoned) 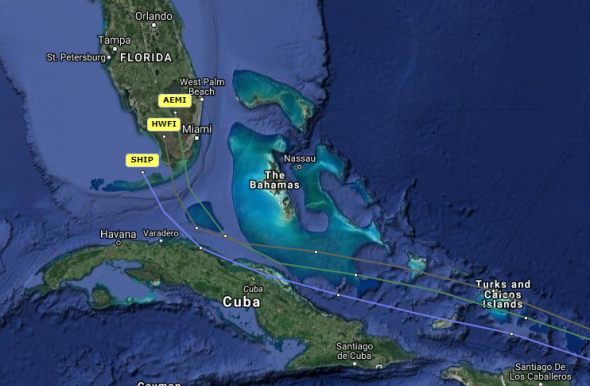 When looking at the wind strength models, it looks like NWS is closely following SHIP (the yellow line) again. 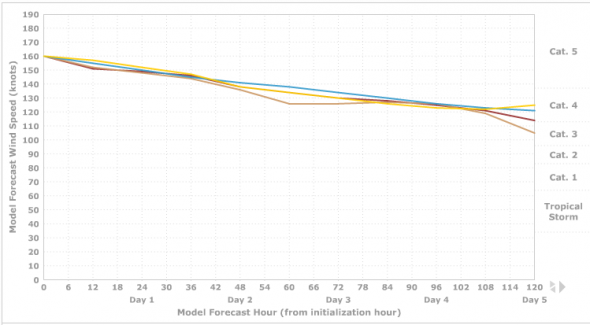 A concern is that SHIP missed the 185 mph strengthening today and didn’t predict the track as well as GFS. The GFS consensus wind model keeps Irma at 160 kts (185 mph) or higher until Sunday. 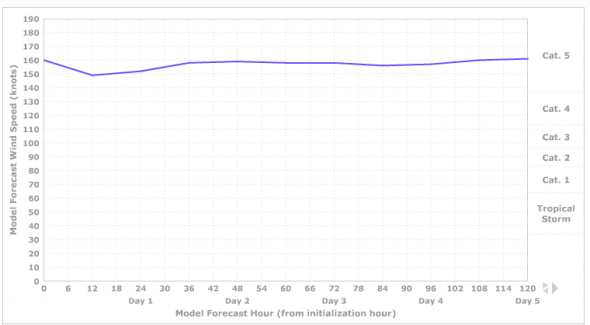 If the storm takes the current model’s predicted course, straight up the middle of the Florida peninsula, damage could be catastrophic for the state. The storm could devastate communities from the Keys to the panhandle in a matter of just over 24 hours. Floridians should start preparing now to either shelter-in-place or evacuate. Don’t wait until the last minute and please listen to local authorities for instructions.

* Haiti from south of Le Mole St. Nicholas to Port-Au-Prince

STORM SURGE: The combination of a life-threatening storm surge and large breaking waves will raise water levels ABOVE NORMAL TIDE LEVELS by the following amounts within the hurricane warning area near and to the north of the center of Irma. Near the coast, the surge will be accompanied by large and destructive waves.

The combination of a life-threatening storm surge and the tide will cause normally dry areas near the coast to be flooded by rising waters moving inland from the shoreline. The water is expected to reach the following HEIGHTS ABOVE GROUND if the peak surge occurs at the time of high tide…

The deepest water will occur along the immediate coast in areas ofonshore winds, where the surge will be accompanied by large and destructive waves. Surge-related flooding depends on the relative timing of the surge and the tidal cycle, and can vary greatly over short distances. For information specific to your area, please see products issued by your local National Weather Service forecast office.

Hurricane and tropical storm conditions are possible within the watch area in Haiti, the Turks and Caicos Islands, and the southeastern Bahamas by early Thursday.

RAINFALL: Irma is expected to produce the following rain accumulations through Thursday:

Irma is expected to produce the following rain accumulations Wednesday through Saturday:

These rains could cause life-threatening flash floods and mudslides.

SURF: Swells generated by Irma will affect the northern Leeward Islands, Puerto Rico, the Virgin Islands, the southeastern Bahamas, the Turks and Caicos Islands, and the northern coast of the Dominican Republic during the next several days. These swells are likely to cause life-threatening surf and rip current conditions.

STAY ALIVE in Your Football Survivor Pool – Week One

Bride Of Christ: Preparing For Your Wedding Day