(EDITOR’S NOTE: This was a singularly unpopular column. Only one of the subscribing news outlets of the Cagle Syndicate chose to run it. See if you can guess why.)

The last couple of weeks have been so stressful for Trump voters that conversion to Islam is looking increasingly attractive as a means of avoiding media scrutiny. 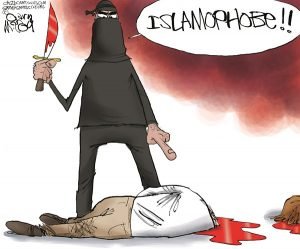 The fact is both Trumpistas and the Umma bear a certain similarity. Trump voters and Moslems both adhere to the instruction of man whose example, in at least some instances, is wildly out of sync with contemporary mores — even if specifics differ.

[Note on “Moslem.” Muslim is an Arabic word. I’m not an Arab so I use the English term Moslem. Do we call the Germans the Deutschen? Are the Hindus the Hindoos? Of course not. Enforcing Muslim instead of the perfectly good Moslem is another example of the cultural coddling extended to Islam that is found nowhere else and is the basis of this column.]

Take women for instance. Both had multiple wives, Mohammed simultaneously and Trump consecutively. In parts of the Islamic world the attraction of women is viewed as so powerful they are hidden in gunnysacks. Trump is in agreement, but he paraded women in bikinis down a runway.

Trump speculated regarding the results of groping women, while Islamic scholars have rules for beating women. Islam is plagued by female honor killings, while Trump’s tweets claim some females are dishonorable. And both groups must contend with fallout from the more zealous adherents.

In the Moslem case it’s jihadis and in the Deplorables case it’s Trump.

Yet the aftermath after major Religion of Peace incident is the complete opposite of the recriminations that ensue after a major Trump incident.

In Barcelona jihadis attacked a crowd of pedestrians with a rented van. The resulting toll was 15 dead and 120 wounded. This attack was actually the second of three that began with the explosion of a bomb manufacturing operation and ended with another vehicle attack that saw five jihadis shot dead.

In Charlottesville, VA there was only one event, a Nazi and bigots protest in favor of retaining statues of Civil War heroes who also happened to be slave owners. Counter protesters appeared on the scene and in the resulting violence a woman that was part of the mob protesting the protesters was killed by one of the bigots.

In Spain, even before the last jihadi was caught, the media herd feared a potential outbreak of “Islamophobia.” Yahoo News warned, “Muslims Fear Anti–Islam backlash in Tolerant Barcelona.” While area hospitals were still treating victims in critical condition, one Moslem woman griped, “In the end Muslims are the main victims, for the deaths as well as for the social pressure.”

And the media doesn’t contact a single one of the real victims for a word in response.

Here in the US not only is there no concern regarding an outbreak of Trumpophobia after an incident, the Opposition Media is handing out infected blankets.

It didn’t help that Trumps thumbs are no more articulate than his lips. A tweet that was supposed to condemn ALL the violence in Charlottesville doesn’t measure up to the OpMedia’s content standards. Trump is therefore accused of giving aid and comfort to Nazis and bigots.

Trump wasn’t even part of the Charlottesville march, but the OpMedia contends he bears responsibility because the bigots were white and presumably some were Trump voters.

Naturally this means all Trump supporters are equally guilty.

Corporate CEOs on Trump advisory boards smell the tar bubbling and they begin to resign in a huff. A pastor on a religious advisory board can’t stand to associate with a man who tweets so poorly and he resigns.

Lest someone get the idea there is a nexus between terrorism and Islam, the Washington Post assures readers there is no fallout in Barcelona businesses run by Moslems. A computer storeowner is immune to bombing backlash, as is a nearby grocery store owner. I’m sure customers would be happy to step over the debris to shop if it meant staving off an outbreak of the dreaded Islamophobia.

Meanwhile here in the US the CEO of Camping World has told customers who agree with Trump to shop somewhere else. The guilt by association even extends to pre–Charlottesville bumper stickers. A week ago my wife made the mistake of driving down the road in Virginia with a Trump/Pence sticker on her car.

A tolerant advocate of peace and love began honking at her and making obscene gestures before she cut my wife off.

I suppose the only hope for relief is for Trumpistas to convince the OpMedia there are “moderate Trump voters” worth cultivating. It worked for the mullahs in Iran, maybe it will work here.