As the monstrous 180-mph death storm Hurricane Irma continues to churn towards Florida, the ACLU has its panties in a bunch over the words of one county sheriff who is doing his duty to protect the citizens.

Polk County – which is east of Tampa – is prepared to open hurricane shelters but with a big caveat – no sex offenders will be allowed.

This according to Polk County Sheriff Grady Judd who sent the message out via Twitter.

We cannot and we will not have innocent children in a shelter with sexual offenders & predators. Period. https://t.co/DlhqjqFrkM

Sheriff Judd also strongly recommended that anyone who has an outstanding warrant and is in need of being sheltered, to turn themselves in and he would see to it that they had a dry place to dodge the worst effects of the storm in the Polk County jail.

If you have a warrant, turn yourself in to the jail – it's a secure shelter https://t.co/UFNGNafJh8

He also emphasized that identification cards will be checked at shelters and that those with warrants will be escorted to the iron bar hotel.

If you go to a shelter for #Irma and you have a warrant, we'll gladly escort you to the safe and secure shelter called the Polk County Jail https://t.co/Qj5GX9XQBi

This, of course, enraged the Florida branch of the radical leftist American Civil Liberties Union which cried bloody murder that this fascist lawman who must be a Trump supporter is violating the rights of those who are criminals and child molesters.

You can certainly tell whose side the ACLU is on.

The sheriff, who is known for his outspoken comments, made the threat in a series of posts to Twitter.

“If you go to a shelter for #Irma and you have a warrant, we’ll gladly escort you to the safe and secure shelter called the Polk County Jail,” Judd tweeted to his nearly 66,000 followers on Twitter.

Judd also posted that officers would be at every shelter checking IDs and that sex offenders and sex predators would not be allowed inside.

When checking IDs, if an officer sees that someone has a warrant, that person will be taken into custody, Sheriff’s Office spokeswoman Carrie Horstman said.

Horstman added officers don’t have a way of seeing what crime the warrant is for, so it’s possible those with non-violent misdemeanor offenses could be arrested.

“Officers are legally obligated to take a person into custody if they have a warrant,” she said.

Judd said in preparation for the hurricane, fugitives should turn themselves into the jail because “it’s a secure location.”

Horstman said the posts were made ahead of the storm to give people ample time to prepare.

“We cannot and we will not have innocent children in a shelter with sexual offenders and predators. Period,” Judd posted to his Twitter, @PolkCoSheriff.

Horstman said since there’s a possibility children will be in the shelters, sex offenders and sex predators are not allowed inside. She said they had a similar policy during the 2004 hurricane season. It’s unclear if any arrests were made at shelters due to warrants.

The American Civil Liberties Union of Florida said Judd should “focus on preparing for Irma, not burnishing your Joe Arpaio-style ‘tough cop’ credentials with irresponsible tweets.”

Arpaio, a former sheriff in Arizona, was found guilty of criminal contempt after denying a court order to halt stopping immigrants because of suspicion they were in the country illegally. He was pardoned by President Donald Trump last month.

The nonprofit says most people with outstanding warrants are low-level offenders and pose no threat in a shelter.

Judd’s comments “send the message that these individuals must choose between facing a natural disaster without aid and shelter or going to jail over things like unpaid traffic tickets,” a statement from ACLU reads.

The ACLU resorts to using former Maricopa County, AZ Sheriff Joe Arpaio who has been demonized by the left as an example to trash Judd who is just doing the job that he was elected to do.

Perhaps instead of throwing in with lawbreakers, the ACLU should advise the “low-level” offenders that they should have taken care of their outstanding legal issues if they were that minor. It’s not exactly the finest quality of character that is exemplified by willingly dodging an outstanding warrant.

Polk County isn’t expected to take the brunt of the storm which continues to shift east according to data provided by the National Hurricane Center. 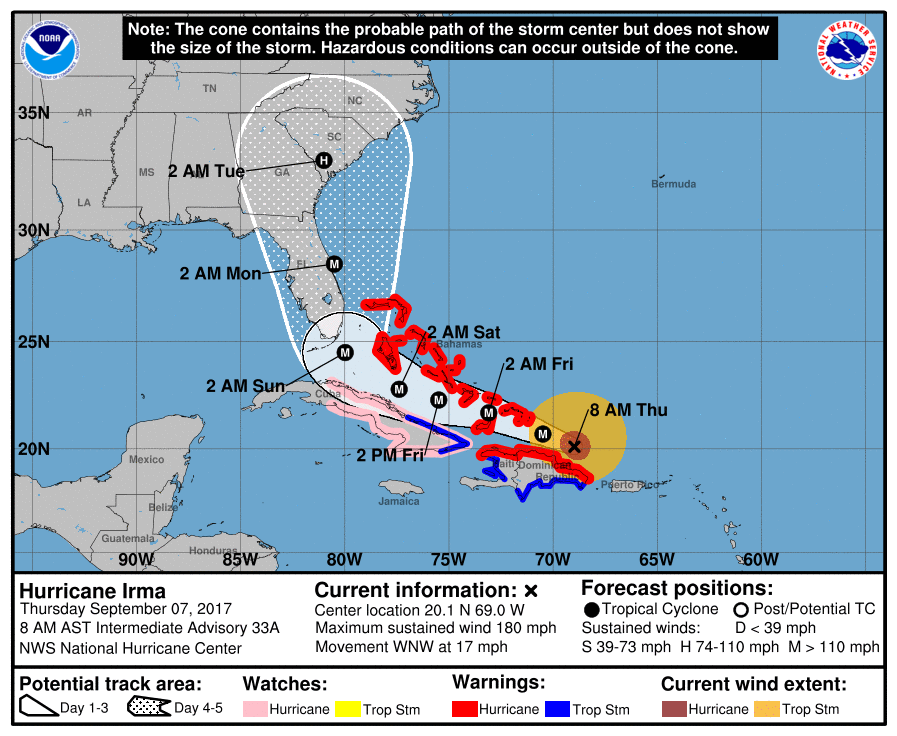 Support Conservative Daily News with a small donation via Paypal or credit card that will go towards supporting the news and commentary you've come to appreciate.
Tags
Florida Hurricane Irma Sheriff Joe Arpaio The ACLU