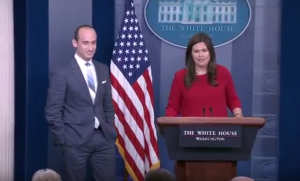 Miller was trotted out to a White House Press Briefing Wednesday to talk about the RAISE Act, legislation that would bring the United States’ immigration policy more in line with other developed countries. The measure would create a merit-based system in which those most suited to succeed in the U.S. would be at the head of the line for a green card.

It’s time to look towards the nation’s future and that means basing immigration policy on economic realities, not a sonnet.

Acosta incorrectly lifted Emma Lazarus’ poem “The New Colossus” up as immigration policy.”What you’re proposing, or what the President is proposing here does not sound like it’s in keeping with American tradition when it comes to immigration,” Acosta remarked then quoted Lazarus work, “The Statue of Liberty says, Give me your tired, your poor, your huddled masses yearning to breathe free,” which is a poetic narrative of legal immigration in a much different time. It’s also a poem, not policy. It’s time to look towards the nation’s future and that means basing immigration policy on economic realities, not a sonnet.

Where humans are concerned, emotions are sure to be involved, but Acosta’s are misplaced. Modern legal migration no longer looks like ship fulls of impoverished Irish immigrants landing at Ellis Island and the nation is not hurting for unskilled laborers. Times have changed and our green card policy must change with it.

“The reason why some companies want to bring in more unskilled labor is because they know that it drives down wages and reduces labor costs,” Miller told reporters. And minorities are disproportionately affected by this 50-year-old immigration policy.

Global commerce has increased international competition and the need to attract highly-skilled workers. The RAISE Act reflects the nation’s needs. Employability and the ability to economically sustain oneself are metrics used by Canada and Australia. United States companies compete with businesses in those countries, so its immigration policy should be one that enhances the U.S.’s ability to compete.