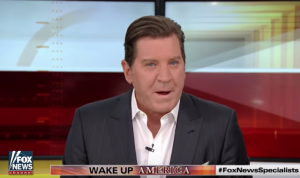 Fox News Host Eric Bolling was suspended by the network after allegations of lewd behavior were leveled against him.

*Update: Eric Bolling lost his career at Fox and his only child on the same day

Bolling, host of “Fox News Specialists,” was suspended Saturday after he was accused of having sent pictures years ago of male genitalia to at least three female co-workers.

“Eric Bolling has been suspended pending the results of an investigation, which is currently underway,” Fox said in a statement.

A report states that two women at Fox Business and one at Fox News received the images in text messages from Bolling. It is unclear why an alleged incident from years ago is only now coming to light.

The investigation will be carried out by Paul, Weiss, the same outside counsel that handled the ousting of former host Bill O’Reilly, and Roger Ailes after unproven allegations of sexual harassment ended their careers at Fox News.

Bolling has hired his own counsel and is fighting the so-far unsubstantiated allegations vigorously.

Bolling’s attorney, Michael J. Bowe, said, “Mr. Bolling recalls no such inappropriate communications, does not believe he sent any such communications, and will vigorously pursue his legal remedies for any false and defamatory accusations that are made.”

Claims of sexual impropriety were also leveled at Fox News host Sean Hannity which he vehemently denied and successfully defended himself against.

Harassment allegations have been levied against the most Conservative and popular voices on the network just as liberal ideologues Lachlan Murdoch and James Murdoch seek to rebalance the network further to the left.

Support Conservative Daily News with a small donation via Paypal or credit card that will go towards supporting the news and commentary you've come to appreciate.
Tags
Eric Bolling Fox News Paul