The gunman that entered the Virginia’s on King restaurant in downtown Charleston, South Carolina, shot and killed one person and took several others hostages has been shot by police ending the crisis.

Witnesses say an older black man wearing an apron and dressed like a kitchen staff member walked through the front door holding a small caliber revolver. He locked the door and said,  “I am the new king of Charleston.”

A police spokesman told reporters that the man is a disgruntled former employee of the restaurant.

The gunman then herded customers to the back of the restaurant where several were able to exit through two side doors.

One person has been shot and transported to a local hospital. Several others are being held hostage.

Other witnesses said that the man looked like “an ordinary grandpa, but he had a crazy look. It was very crazy.”

The Charleston School of Law is locked down the campus and canceled 1:30 classes.

The city has asked that we lockdown campus until the shooter situation is resolved. 1:30 classes are cancelled.

While most took to social media to pray for the victim, shooter and hostages, others used the incident to express their racist tendencies or whatever the hell this is: 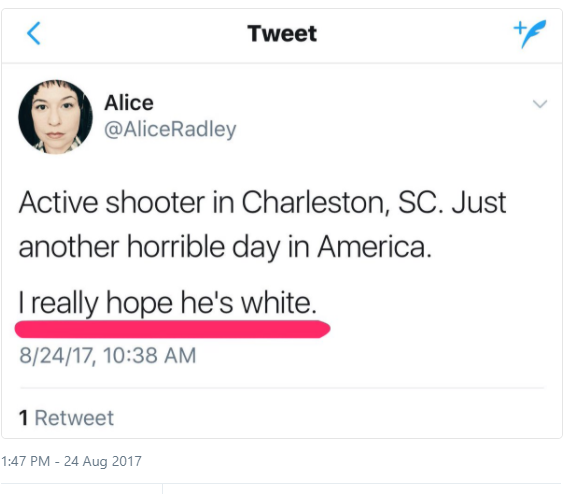 Alice has since made her account private. The backlash was quick and furious.

Support Conservative Daily News with a small donation via Paypal or credit card that will go towards supporting the news and commentary you've come to appreciate.
Tags
Charleston Shooting South Carolina