Al Gore released his self-aggrandizing documentary “An Inconvenient Sequel” over the weekend and it went straight to the bottom placing 15th in box office sales.

The film may have been beleaguered by the false predictions made in the original “An Inconvenient Truth”: Mount Kilimanjaro’s peak still has snow year-round, global temperatures have not gone on the horrific rise predicted, polar bears are thriving in the Arctic,  Greenland still has ice and Manhattan isn’t permanently flooded due to sea level rise (but Mr. Gore does try to revise this claim in the new movie.)

The documentary may have struggled because Al Gore just isn’t popular outside the echo chamber of the climate church. Shh, don’t tell him, because he invented the internet … or something.

Or, the freakin’ thing just stinks. 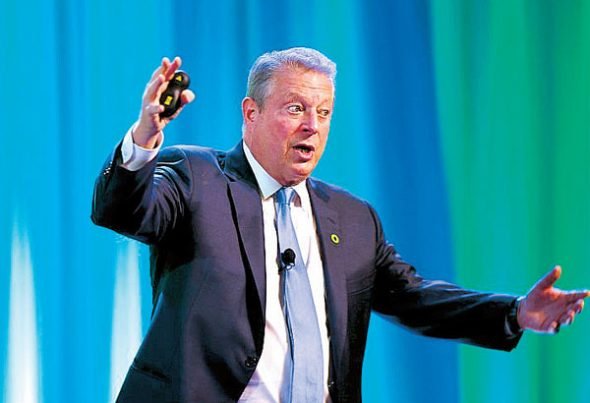 It’s basically 100 minutes of following Al Gore around while he saves humanity from itself.

“Occasionally Gore talks directly to the camera, but for the most part we’re following him around as he engages in his work: sitting with his staff, giving presentations on climate change at seminars, traveling the world…”

Who wants to watch that?

The Rotton Tomatoes Audience score showed that less than half of those that bothered to see the movie liked it and that’s among the environmentalist faithful. The sequel grabbed just a 2.8-star rating and who wants to spend their hard earned dollars to see another Al Gore flick that, like its predecessor, contains some questionable facts.

That sinking feeling wasn’t alleviated when I got home and started reading reports that Gore’s own role in the Paris agreement, and particularly in the compromise struck with India, may have been inflated by the film.

According to an E&E News story, the film’s pivotal and most triumphant sequence — in which Gore helps negotiate with SolarCity, an American company, to pass on intellectual property to India to help the country adopt solar energy — is not just (at best) a bit misleading, but also not supported by the results since then:

[A]lmost 20 months after the gavel came down in Paris, there’s still scant evidence that SolarCity has delivered anything.

“SolarCity has not come to India, and nor has it signed any agreement at all, and certainly no technology transfer agreement has been entered into between SolarCity and any Indian organization,” said Mathur.

Even liberal-run Vox could only give this mess 2.5 stars:

“it felt like a strange film to be watching,” wrote Alissa Wilkinson. “The movie was anachronistically optimistic as if it had been made expecting a different election result and then hastily edited to accommodate reality.”

Not everyone faults the film for its own failure. Climate change zealots believe that the film was sabotaged by Paramount.

A botched strategy by Paramount Pictures effectively sabotaged the nationwide release of the Al Gore documentary An Inconvenient Sequel: Truth to Power, which finished in 15th place in US theatres this weekend. This was not supposed to happen.

Another possibility is that while theaters have steadily increased ticket prices to make up for lower theater attendance, this movie doesn’t rate the price hike. In the large Metro areas in which the film was first released, a movie ticket can get close to $20 per person and the concessions aren’t cheap. A couple would have to really be motivated in order to blow a date night and $60 bucks just to have Al Gore preach to them for almost 2 hours.

Support Conservative Daily News with a small donation via Paypal or credit card that will go towards supporting the news and commentary you've come to appreciate.
Tags
Al Gore An Inconvenient Sequel An Inconvenient Truth climate change