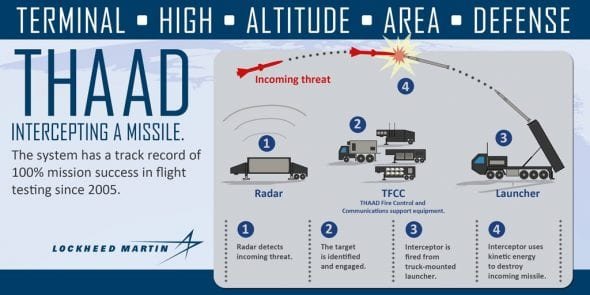 During the test, designated Flight Test THAAD (FTT)-18, the THAAD radar first detected, acquired and tracked the target. The THAAD system then developed a fire control solution and launched an interceptor that destroyed the target’s reentry vehicle with the sheer force of a direct collision.

“Our THAAD system performed flawlessly in today’s test and we are proud to support the Missile Defense Agency and U.S. Army as they demonstrate the system’s unmatched capabilities,” said Richard McDaniel, vice president of Upper Tier Integrated Air and Missile Defense Systems at Lockheed Martin. “With this successful test, the THAAD system continues to prove its ability to intercept and destroy many classes of the ballistic missile threat to protect citizens, deployed forces, allies and international partners around the globe.”

This was the 14th successful intercept in 14 attempts for the THAAD system since 2005.

The THAAD system uses hit-to-kill technology to destroy a threat with direct impact to neutralize lethal threats before they reach protected assets on the ground. The system is rapidly deployable, mobile and also interoperable with other Ballistic Missile Defense System (BMDS) elements, including Patriot/PAC-3, Aegis, forward-based sensors and the Command, Control, Battle Management, and Communications system.

Support Conservative Daily News with a small donation via Paypal or credit card that will go towards supporting the news and commentary you've come to appreciate.
Tags
THAAD