In all the discussion of the shooting during Republican practice for the Congressional baseball game, I was struck by the fact no one thought it odd that none of the other participants tried to help seriously wounded Rep. Steve Scalise to safety.

They knew he was hurt. They saw the trail of blood as he tried to drag himself off the field. But no one went to his aid. Like a herd of wildebeest fleeing a lion attack, the wounded and slow were left behind. 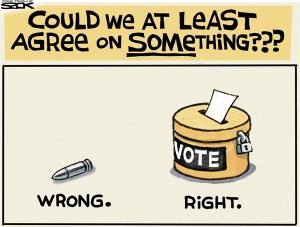 Now that the coast is clear, members of Congress are leaping out of the dugout and discussing ways taxpayers can protect them in the future.

Certainly, this unprovoked attack was cowardly, but the fact the victims were politicians doesn’t require mobilizing the nation. I’d feel equally outraged if the Bernie Bro had shot up a gathering of Jaycees — that notorious hatchery of young capitalists.

What I’m trying to do is put the incident in perspective.

The fact is that if you were offered a choice between being the cashier in a tow truck facility and a member of Congress, people interested in personal safety should choose Congress. The last member to be killed in an individual attack was Leo Ryan in 1978. Before Scalise was shot, the last member attacked was Rep. Gabrielle Giffords in 2011. Prior to that, it was John Stennis in 1973.

Four attacks in 44 years aren’t exactly the definition of danger.

If you’re looking for a “public servant” that’s actually in danger while doing his job, talk to a mailman, not a politician.

An intelligent, as opposed to hysterical, response to the shooting confront taxpayers with a paradox: most individual members of Congress are eminently replaceable mediocrities. It’s only in clumps that congressmen are valuable. I wouldn’t go so far to say the whole is greater than the sum of its parts, but you get the idea.

Losing members in bunches of 20 or 30 would convulse the country and subject the remaining members to crippling workloads. Mitch McConnell might have to establish the four–day workweek in the Senate.

So I reluctantly support the security state measures taxpayers are subject to when they enter the Capitol and House or Senate office buildings. Off–Capitol gatherings that attract 20 or more members — say two lobbyists having lunch with an open seat at the table — also deserve enhanced security. But I draw the line at individually assigned protective details.

Naturally, that’s exactly what big–government politicians and Democrats too passive to be responsible for their own safety are talking about. Many of the politicians who promise to “fight for you” are seriously considering protective details for every member of Congress. An extravagance Politico calculates would cost over $1 billion.

Instead, I support Rep. Thomas Massie (R–Don’t Tread on Me) who introduced a bill that would require gun–phobic Washington, DC to honor concealed carry permits from other states. This would let DC politicians defend themselves.

Massie explains, “After the horrific shooting at the Republican Congressional Baseball practice, there will likely be calls for special privileges to protect politicians. I do not want to extend a special privilege to politicians because the right to keep and bear arms is not a privilege, it is a God–given right protected by our Constitution.”

I’d support Massie if the bill only applied to politicians, particularly if the alternative is taxpayer–paid bodyguards. Those micro–potentates don’t need anything else to feed their egos. Why can’t they take their chances with everyday life just like the rest of us?

A Washington Post reporter described an encounter Sen. Orrin Hatch (R–Methuselah). Hatch invaded an elevator with three members of his security detail. The Postie asked whether more of his colleagues should receive security details. Displaying the noblesse oblige that’s made him a byword for the common touch, Hatch replied, “I think all of you deserve protection, too. I think we have to protect everybody.”

No word on whether he offered to detail one of his three bodyguards to accompany the reporter.

Individual security details will soon become 535 mini–motorcades clogging up the nation’s streets in the name of “national security.”

Taxpayers don’t need to harden the DC bubble. Let politicians experience life like the rest of us. The argument is made that these indispensable marshmallows are the nation’s leadership. They get death threats, suffer road rage incidents and people say mean things about them. My response is, so what? I’ve been on the receiving end of all three offenses and I’m not looking for a taxpayer–paid Praetorian Guard.