In an op-ed published at The Hill Dr. Sebastian Gorka outlined the promises and successes of the young Trump administration in three simple words – “America is Back.”

“We are only one-half year into Donald Trump‘s presidency,” Gorka wrote. “In that very brief period, we have seen the nation’s economy re-energized, illegal migration plummet, the NATO alliance revitalized, and the president order new measures to secure America from terrorists.”

Gorka has been a prominent supporter of Donald Trump, so his positive view of the administration’s progress is not surprising – but is he right?

GDP grew in the fourth quarter of 2016 and first quarter of 2017 at a rate almost double that of year-ago numbers. Second quarter figures will be released later this month.

Manufacturing is showing amazing optimism and growth under Trump’s policies and promises.

The broadest measure of sentiment in the manufacturing sector, the Product Managers Index, rose 2.9% to 57.8% in June demonstrating a manufacturing sector that is seeing growth and expecting more in coming months. Factories picked up at the fastest pace in three years.

Today, President Trump announced a joint investment by Merck, Pfizer, and Corning that will build facilities in New York, New Jersey, and a Southeastern U.S. state to be named later, in order to produce their innovative new glass packaging for all of their pharmaceuticals. The initiative will create up to 4,000 American jobs after a total investment of $4 billion. The manufacturer’s representatives thanked the President for his leadership and pro-manufacturing policies that made building the new facilities in the U.S. viable.

Customs and Border Protection reported in July a 53 percent decrease year-over-year in the number of apprehensions at the southwest border. Apprehensions act as a proxy for how many people are trying to cross the border and a drop in apprehensions indicates a commensurate drop in illegal alien crossings.

“As far as the Trump administration’s efforts on immigration, this is something they campaigned heavily on,” Judd said. “At six months, where we are on meeting those promises, we are seeing nothing short of miraculous. If you look at the rhetoric that President Trump has given, it has caused a number of illegal border crossings to go down. We have never seen such a drop that we currently have.”

Earlier this year, President Trump had scolded NATO allies over their failure to meet commitments in defense spending. The president went so far as to call the alliance “obsolete” much to the chagrin of mainstream media, but his strategy worked.

NATO, beginning in May, now actively flies missions against ISIS and more nations are increasing their spending to create a strong defense against a growing Russian threat. NATO Secretary General Jens Stoltenberg told Trump that the improvements in NATO burden-sharing were due in large part to his strong leadership.

“I thank you for your attention to this issue,” Stoltenberg said. “We are already seeing the effects of your strong focus on the importance on burden sharing in the alliance.”

The war on terror suffered under the indecisiveness and micro-management of President Obama. Victories became defeats and successes turned into pull-outs. Now, ISIS is losing strongholds, money, leaders and its Caliphate at a rate no one could have predicted.

The self-styled caliphate of the Islamic State militant group (ISIS) is unlikely to survive its fourth year not only because it is losing territory, but because it is going broke, according to new analysis.

The jihadi group has not only lost more than 60 percent of the territory it held straddling the Iraqi-Syrian border, but it has lost 80 percent of its revenue, according to London-based defense consultancy IHS Markit.

As that analysis was being published, coalition-trained Iraqi forces recaptured the northern Iraqi city of Mosul – the last ISIS controlled major city in the country.

President Trump credits his policy of authorizing military leaders to do what is needed to destroy ISIS without having to ask permission first.

“What I do is I authorize my military,” in response to a press question about the use of a massive bomb in an assault on Islamic State group positions in Afghanistan. “We have the greatest military in the world, and they’ve done the job, as usual. We have given them total authorization, and that’s what they’re doing.

America is indeed “Back”

Dr. Sebastian Gorka has correctly pointed out Trump administration successes that the mainstream media would not. The numbers are there and the successes are real, but the only stories they seem to be interested in covering involve non-existent Trump-Russia collusion and O.J. Simpson’s parole hearing.

Americans are feeling better than they have in a long time about their finances, security and future.

As ISIS continues its decline, border security improves and the economy continues to grow, more Americans will come to understand that MAGA was a promise and, as promised, America is back. 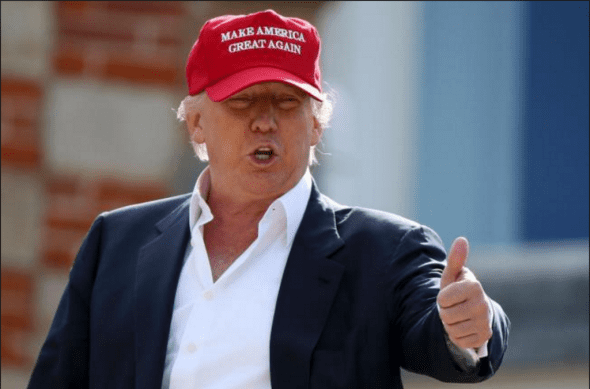