Sophistication functionaries all across the nation are in a tizzy. President Trump’s budget calls for the elimination of the National Endowment for the Arts, which is a festering legacy of the Johnson administration, but the NFL may be able to comfort them. 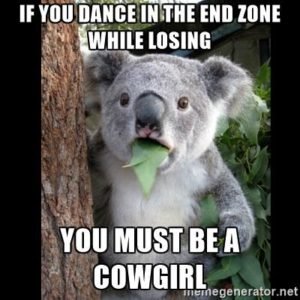 From the program’s beginning in 1965 until 2015 bureaucrats at the NEA made 140,000 grants totaling over $5 billion. Outright NEA elimination could set off domino effect warnings like we haven’t seen since the last chopper lifted off from the embassy in Saigon.

The people squealing the loudest aren’t necessarily artists; it’s the arts infrastructure. The culture claque that doles out taxpayer money will suffer a double whammy. First, their social life will take a tremendous hit. Since these bureaucrats will no longer control the distribution of free taxpayer money, there’s no reason for the culture combine to comp their tickets.

They’ll be queuing up at the cash bar with the rest of us common folk.

Outright elimination in DC could ripple all the way down to Des Moines.

Still, there may be a glimmer of hope for interpretive dance. It looks like the NFL is preparing to grasp the torch and allow self–absorbed athletes to “get down” in the end zone.

Or as one puerile columnist for NFL.com put it, “NFL is putting the fun back in football.  ”

Thank goodness Roger Goodell has decided to end the unrelieved tedium football fans have suffered through from 1939 until 2003 when Joe Horn made a spectacle of himself during a Monday night game.

Goodell made the announcement using the same robotic corporate–speak he’s made famous: “We know that you love the spontaneous displays of emotion that come after a spectacular touchdown.”

Only the exhibitionism isn’t “spontaneous.” Players rehearse their little dances in practice. And performances aren’t confined to “spectacular” scores. A player that trips over a referee and falls into the end zone gives us the same “look at me” exhibition that comes after a 50–yard TD run.

Sportswriters who may secretly yearn to be gymnastics judges are all lathered up about the return of approved exhibitionism. Their consensus is toddler–style “look at me, look at me!” antics are just what the game needs. The Washington Post is looking forward to “showmanship” while I yearn for a return to professionalism.

If fans like those little end zone jigs so much, why isn’t modern dance more popular?

Players that want to express individuality can enter American Idol. Football is a team game. Only these dancing machines spell it “teaME.” Former running back Jamal Anderson calls the new rule, “the Odell Beckham freedom clause.”

What a great example for young players! Beckham is the teaME–first receiver who convinced the NY Giants’ receiving corps to join him for party time in Miami before their first playoff game against Green Bay – which NY lost.

This year the coach’s dream is skipping practice sessions in favor of nuzzling with his new girlfriend. A fresh influx of self–important, selfish players is just what Dr. Goodell ordered.

The only sensible coverage comes from Cameron DaSilva and even he supports this teenage showing off. DaSilva reminds us the NFL will start the play clock after the official signals a touchdown. Teams have 40 seconds to snap the ball or be penalized.

He put a stopwatch on the last seven games of the season and all the playoff contests and found teams are taking 45 seconds between the call and the snap. So without any festivities, teams are five seconds late.

For just a moment there was a glimmer of hope for mature fans that are tired of freestyle egomania, then DaSilva dropped the bomb. In 119 games he evaluated there were only 32 touchdowns that weren’t followed by a booth review, penalty or injury. That comes out to one-quarter of a TD per game that will be affected by the snap clock.

After the vast majority of the scores, there will be time for the entire team to rumble into the end zone and form a chorus line like the Rockettes.

Even worse, if the NFL allows cut–rate choreography the decay will soon travel from college to high school to Pee Wee football. Pushy parents will be sending junior to a dance teacher in the off–season to get his YouTube on.

Horn, who has some investment in showing off, says kids “like seeing the guys act a fool.” That may be correct, but the kids aren’t buying the tickets.

Support Conservative Daily News with a small donation via Paypal or credit card that will go towards supporting the news and commentary you've come to appreciate.
Tags
football NEA Odell Beckham Roger Goodell Sports The NFL