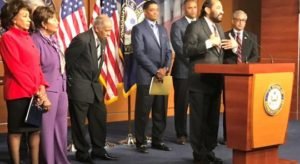 Two Democrats have begun drafting articles of impeachment against U.S. President Donald Trump using the firing of former FBI Director as a basis.

Reps. Al Green (D-TX) and Brad Sherman (D-CA) announced their all-but-impossible mission on Wednesday saying that Comey’s termination is tantamount to obstruction of justice and therefore an impeachable offense.

“The question really is whether the president can obstruct justice with impunity,” Mr. Green told reporters at a press conference. “We live in a country where no congressmen, no senator, and not even the president of the United States of America is above the law.”

Democrats on the Senate Intelligence Committee tried Wednesday morning to get top intelligence officials to say that Trump interfered with their investigations and intelligence gathering. All present said that they had felt no pressure from anyone in any way … at all. James Comey‘s testimony on Thursday is likely to be a similar circus.

Democrats hope to use obstruction to remove Trump from office just a few months into his first term. But most have stayed away from calling for impeachment without any evidence of obstruction. A failed impeachment bid could turn out looking more like a witch hunt and hurt Democrats with moderate voters.

The effort to impeach the President is doomed to failure before it starts. Republicans hold the House of Representatives which would have to take up and vote in favor of the Articles of Impeachment and the GOP-led Senate would have to vote, by a two-thirds majority, to remove him from office. Neither is likely to happen while Republicans hold both houses.

The latest shot at the President comes the same day as the release of James Comey’s opening statement in which no evidence of obstruction is found and Comey re-asserts his prior testimony that he did not feel pressured to end the investigation into Michael Flynn.

Ex-CIA Director: Republicans Are The Most ‘Dangerous’ Political Group Ever