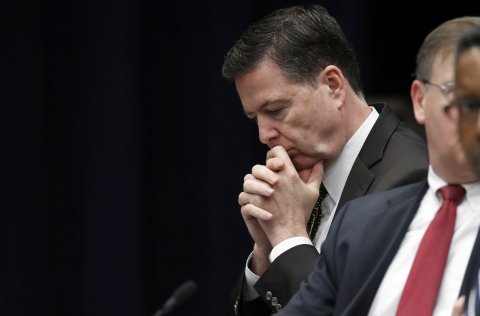 Fired FBI Director James Comey may be in civil and criminal jeopardy as his disclosure of the Trump memos appears to violate the FBI employment contract.

2. All information acquired by me in connection with my official duties with the FBI and all official material to which I have access remain the property of the United States of America. I will surrender upon demand by the FBI, or upon my separation from the FBI, all materials containing FBI information in my possession.
3. I will not reveal, by any means, any information or material from or related to FBI files or any other information acquired by virtue of my official employment to any unauthorized recipient without prior official written authorization by the FBI.

If Comey did not receive prior written authorization to leak the memos of his conversations with the President, he could face a civil lawsuit from Trump at a minimum and possibly a criminal indictment. It certainly proves that he needed to be fired.

Violations of this employment agreement may constitute cause for revocation of my security clearance, subject me to criminal sanction, disciplinary action by the FBI, including dismissal, and subject me to personal liability in a civil action at law, including but not limited to injunctive relief, the imposition of a constructive trust, and the disgorging of any profits arising from any unauthorized publication or disclosure. In that regard, I hereby irrevocably assign all rights, title, and interests in any such profits to the United States.

Comey admitted leaking the document while under oath in testimony to Congress. He said it was done to provoke the appointment of a special counsel in obvious retribution for having been fired by President Trump.

CNN reported Friday that President Trump’s outside counsel is filing a complaint with the Justice Department Inspector General.

President Donald Trump’s outside attorney plans to file a complaint against former FBI Director James Comey with the Justice Department Inspector General and the Senate judiciary committee, two sources with knowledge of the situation told CNN.

Support Conservative Daily News with a small donation via Paypal or credit card that will go towards supporting the news and commentary you've come to appreciate.
Tags
James Comey the FBI