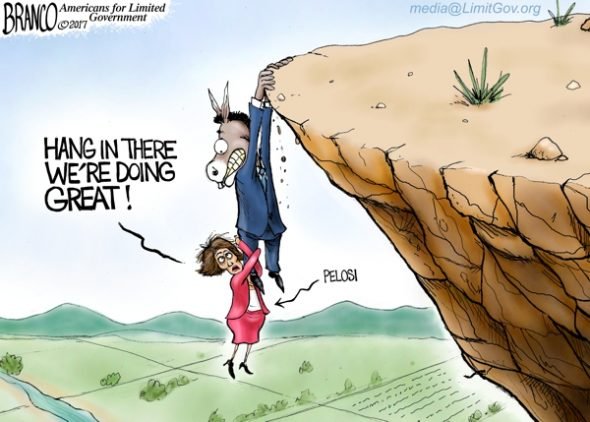 WikiLeaks founder Julian Assange published a missive explaining to the American people how the Democratic party is built from the ground up to fail.

It’s long and instructive. I thought a little bit about whether to publicize it further because who wants to help the other side? As Napolean said – paraphrased -, “Never interfere with an enemy while he’s in the process of destroying himself.”

Assange’s letter rails on the “security sector” referring to the intelligence community, the media, and the Russia collusion B.S. In the end, he says that the only chance Democratic party supporters have to win anything is to start a new party. There’s a lot in that sentence.

He misses the aging leadership and lack of a platform, but otherwise, it’s a worthy read.

Full Text of Julian Assange’s letter on the Democratic party

1. The Democratic establishment has vortexed the party’s narrative energy into hysteria about Russia (a state with a lower GDP than South Korea). It is starkly obvious that were it not for this hysteria insurgent narratives of the type promoted by Bernie Sanders would rapidly dominate the party’s base and its relationship with the public. Without the “We didn’t lose–Russia won” narrative the party’s elite and those who exist under its patronage would be purged for being electorally incompetent and ideologically passé. The collapse of the Democratic vote over the last eight years is at every level, city, state, Congressional and presidential. It corresponds to the domination of Democratic decision making structures by a professional, educated, urban service class and to the shocking decline in health and longevity of white males, who together with their wives, daughters, mothers, etc. comprise 63% of the US population (2010 census). Unlike other industrialized countries US male real wages (all ethnic groups combined) have not increased since 1973. In trying to stimulate engagement of non-whites and women Democrats have aggressively promoted identity politics. This short-term tactic has led to the inevitable strategic catastrophe of the white and male super majorities responding by seeing themselves as an unserviced political identity group. Consequently in response to sotto-voce suggestions that Trump would service this group 53% of all men voted for Trump, 53% of white women and 63% of white men (PEW Research).

2. The Trump-Russia collusion narrative is a political dead end. Despite vast resources, enormous incentives and a year of investigation, Democratic senators who have seen the classified intelligence at the CIA such as Senator Feinstein (as recently as March) are forced to admit that there is no evidence of collusion [https://www.youtube.com/watch?v=0BS5amEq7Fc]. Without collusion, we are left with the Democratic establishment blaming the public for being repelled by the words of Hillary Clinton and the Democratic party establishment. Is it a problem that the public discovered what Hillary Clinton said to Goldman Sachs and what party elites said about fixing the DNC primaries against Bernie Sanders? A party elite that maintains that it is the “crime of the century” for the public and their membership to discover how they behave and what they believe invites scorn.

3. The Democrat establishment needs the support of the security sector and media barons to push this diversionary conspiracy agenda, so they ingratiate themselves with these two classes leading to further perceptions that the Democrats act on behalf of an entrenched power elite. Eventually, Trump or Pence will ‘merge’ with the security state leaving Democrats in a vulnerable position having talked up two deeply unaccountable traditionally Republican-aligned organizations, in particular, the CIA and the FBI, who will be turned against them. Other than domestic diversion and geopolitical destabilization the primary result of the Russian narrative is increased influence and funding for the security sector which is primarily GOP owned or aligned.

4. The twin result is to place the primary self-interest concerns of most Americans, class competition, freedom from crime and ill health and the empowerment of their children, into the shadows and project the Democrats as close to DC and media elites. This has further cemented Trump’s anti-establishment positioning and fettered attacks on Trump’s run away embrace of robber barons, dictators and gravitas-free buffoons like the CIA’s Mike Pompeo.

5. GOP/Trump has open goals everywhere: broken promises, inequality, economy, healthcare, militarization, Goldman Sachs, Saudi Arabia & cronyism, but the Democrat establishment can’t kick these goals since the Russian collusion narrative has consumed all its energy and it is entangled with many of the same groups behind Trump’s policies.

6. The Democratic base should move to start a new party since the party elite shows no signs that they will give up power. This can be done quickly and cheaply as a result of the internet and databases of peoples’ political preferences. This reality is proven in practice with the rapid construction of the Macron, Sanders and Trump campaigns from nothing. The existing Democratic party may well have negative reputational capital, stimulating a Macron-style clean slate approach. Regardless, in the face of such a threat, the Democratic establishment will either concede control or, as in the case of Macron, be eliminated by the new structure.

Support Conservative Daily News with a small donation via Paypal or credit card that will go towards supporting the news and commentary you've come to appreciate.
Tags
Julian Assange media bias Russia the Democratic party WikiLeaks