Social media lit up early Wednesday morning when just after midnight he tweeted a word no one can define. 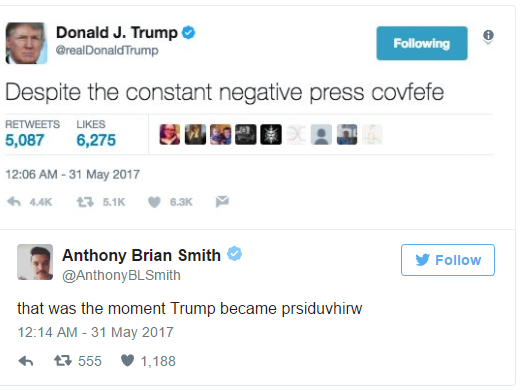 “Despite the constant negative press covfefe” the incomplete and confusing tweet read. The tweet was deleted shortly before the posting of this article.

It is unclear whether someone ripped the president’s iPhone from him as he tried to get a late night tweet out or he just fell asleep before he could complete the thought. The internet took a few guesses.

It was a good run, 5 hours. Gone but not forgotten. #covfefe #NeverForget #RIP

Then, just after six Wednesday morning, President Trump Tweeted this:

Who can figure out the true meaning of "covfefe" ??? Enjoy!

Support Conservative Daily News with a small donation via Paypal or credit card that will go towards supporting the news and commentary you've come to appreciate.
Tags
Twitter