A statue of a puppy relieving himself appeared Tuesday next to a statue named “Fearless Girl” in what appears to be the next shot in the battle of statues in New York City. 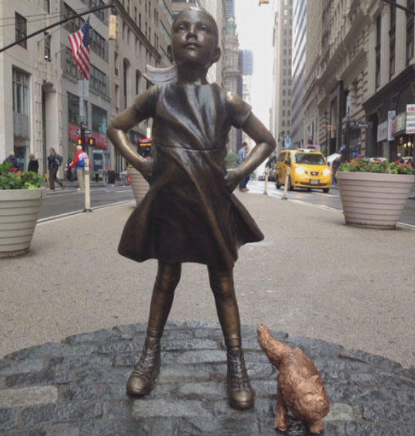 Sculptor Alex Gardega said he put the statue named “Sketchy Puppy” next to “Fearless Girl” who is facing off against the iconic “Charging Bull” statue near Wall Street. Gardega said he left the statue up for about three hours before removing it out of fear someone would steal it.

“I have a lot of empathy for the creator of the bull, Arturo,” Gardega told NBC 4 New York early Tuesday. “I’m a pretty happy person, not seething or angry and certainly not anti-feminist. My piece is not without a sense of humor. There is plenty of room for Fearless Girl it just interferes with another artists work/vision.” “Fearless Girl”, created by Kristen Visbal, was placed in March for International Women’s Day and is a source of controversy.

It was put in place on the eve of International Women’s Day, March 8, by the investment firm State Street Global Advisors to celebrate “the power of women in leadership,” a message the company delivered, we might note with some irony, absent the depiction of an actual woman.

Arturo Di Modica, the artist who created “Charging Bull” felt that his work had been hijacked and violated by the addition of “Fearless Girl.” The idea for the bull was never to represent the possible trampling death of a small child, Di Modica’s lawyers explained during a press conference in March. The idea was to project optimism and strength amid adversity, which at the time of the sculpture’s creation included a market crash that sent the Dow Jones Industrial Average down a terrifying 22%.

The bull statue has been popular since being placed in the dark of night December 15, 1989, in front of the New York Stock Exchange. Whether “Fearless Girl” will remain a permanent fixture has not yet been determined.

Support Conservative Daily News with a small donation via Paypal or credit card that will go towards supporting the news and commentary you've come to appreciate.
Tags
Fearless girl New York City