President Donald Trump said Monday that he is open to increasing the gas tax as long as the revenues went to funding his infrastructure plan and from a conservative perspective he’s got this one right.

Conservatives oppose any and every tax increase mostly for good reason, but the ideological position struggles to identify any taxes as necessary.

While increasing taxes to put money into the general fund is little more than throwing it away, the highway fund has a particular and constitutionally enumerated purpose.

What is the Gas Tax?

When the gas tax was first instituted in 1957, all revenues went to the federal Highway Trust Fund. Several increases followed to keep the trust funded so that road infrastructure could be maintained. The tax was directly related to a constitutionally enumerated power of congress.

To regulate Commerce with foreign Nations, and among the several States, and with the Indian Tribes; – U.S. Constitution, Section 8, clause 3 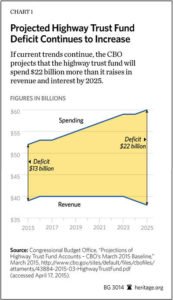 Simply put, yes – the highway trust fund has been underfunded and misused for decades. The deficits got to a point that congress first raided the general fund (remember what I said about that account) and more recently sought to raid the federal reserve to fund highway trust fund deficits.

Improvements in fuel efficiency of cars, trucks, and trains have also decreased revenues as they can all travel more miles on fewer gallons taxed.

The highway fund has also suffered as it has not seen an increase since 1993 and the last two increases allowed gas tax revenues to go to ‘deficit reduction’ that should have come from the general fund or through budgetary measures.

This misuse of the highway fund has led to the public mistrust of congress’ ability to keep gas tax revenues from going to other measures and conservatives, rightly so, have rejected any increase.

Concerns about the gas tax increase

There are two major reasons a gas tax increase has been opposed: federal overspending and the tax’s regressive nature – both are true.

The federal government is overspending, but on social programs not enumerated in the constitution. The New Deal has led to increases in federal spending that no government could possibly manage.

Overspending on progressive programs can only be dealt with if republicans grow a spine, I’m not holding out hope. The regressive nature of a gas tax could be dealt with through offsetting reductions in the FICA tax which the 1% find as little more than a minor nuisance.

Why conservatives should support Trump on the gas tax increase

President Trump said that he would consider a gas tax increase if it went to his infrastructure plan. As long as those funds are used 100% to fund highways, bridges and mass transit he makes a strong point that any constitutionalist should support. If he expands his definition to include pet projects not contributing to the nation’s transportation network, I’ll be the first to cry fowl.

American’s tax money is spent on many projects, entities, and efforts that benefit only the special interest that lobbied for the money. Increasing the gas tax and putting a firm restriction upon 100% of revenues so that they can only be spent on roads, bridges and mass transit infrastructure benefits the people.