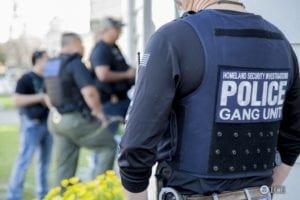 President Trump ran on a law and order platform and now a six-week long I.C.E. operation has ended with 1,378 arrests for crimes ranging from immigration violations to murder.

“Of the 1,378 total arrested, 1,098 were arrested on federal and/or state criminal charges, including 21 individuals arrested on murder related charges and seven for rape and sexual assault charges.” Immigration and Customs Enforcement said in a statement. “The remaining 280 were arrested on administrative immigration violations. Of the total arrested, 933 were U.S. citizens and 445 were foreign nationals from 21 countries in South and Central America, Asia, Africa, Europe and the Caribbean.”

1,095 of those arrested were confirmed gang members or affiliates of gang members. While the largest amount, 137, belonged to the inner-city gang “The Bloods”, 118 were associated with Sureños (Southerners), 104 MS-13 members, and another 104 from the Crips.

“Gangs threaten the safety of our communities, not just in major metropolitan areas but in our suburbs and rural areas, too,” said ICE Acting Director Thomas Homan. “Gang-related violence and criminal activity present an ongoing challenge for law enforcement everywhere. Our efforts to dismantle gangs are much more effective in areas where partnership with local law enforcement is strongest.”

Highlighting the need for stronger border enforcement and perhaps strengthening the barrier on the southern border, Ten individuals arrested during this operation crossed the border as unaccompanied minors. Nine of the 10 were confirmed as gang members, eight of whom were MS-13 gang members.

“Three individuals arrested during this operation previously had deferred action under DACA (Deferred Action for Childhood Arrivals),” I.C.E. said in the statement. “Aliens granted DACA who are found to pose a threat to national security or public safety may have their deferred action terminated at any time and the Department of Homeland Security may seek their removal from the United States. Since the start of DACA in 2012, DHS has terminated deferred action for approximately 1,500 recipients due to criminality or gang affiliation concerns.”