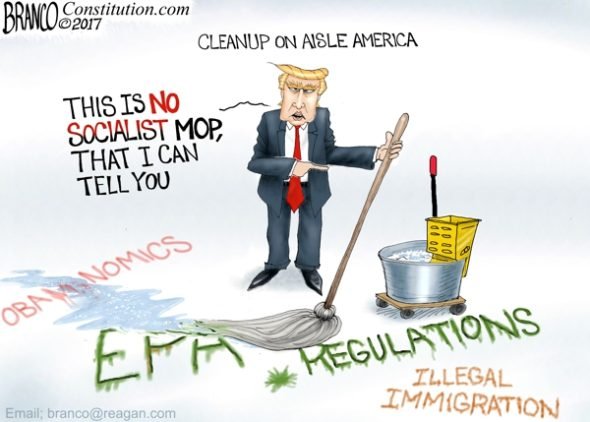 President Trump signed four bills into law Monday that rolled back unfair regulations outdoing his predecessors in limiting the size and scope of the federal government.

“The President has signed 12 congressional review acts,” Spicer said. “In the past, all Presidents combined had signed one. So I think we have a vastly different attempt to roll back regulatory reforms that are standing in the way of freedom as well as business development.”

The Congressional Review Act (CRA) was enacted as part of the “Contract with America” in 1996 and empowered Congress to review, by means of an expedited legislative process, new federal regulations issued by government agencies and to overrule a regulation by way of a joint resolution.

Prior to Donald Trump becoming president, the CRA had only been used six times and only once successfully.

George W. Bush signed a CRA in 2001 eliminating an ergonomics rule submitted by the labor department.

Congress passed five CRA’s against the Obama administration, but all were vetoed by the democrat president.

While Congress’ submission of CRA to the president ultimately decides the pace at which they could be signed, Trump’s is likely driving this unprecedented pace.

If Congress continues to review and find lacking more regulatory overreach, the president seems very willing to help them cross the finish line.

Support Conservative Daily News with a small donation via Paypal or credit card that will go towards supporting the news and commentary you've come to appreciate.
Tags
Barack Obama Congressional Review Act regulations