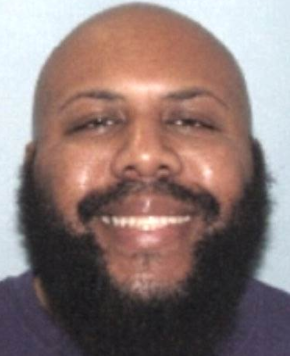 The man who allegedly recorded a video of himself killing an elderly man at random and posting it on Facebook has been found dead of a self-inflicted gunshot wound.

Erie, Pa police received a tip just before 11 am Tuesday that reported seeing Stephens’ white Ford Fusion in a McDonald’s parking lot near Erie. When officers approached the car, a short chase began. Mr. Stephens was stopped when a chasing patrol car used a pit maneuver to spin the suspect’s car at which time he took his own life.

Support Conservative Daily News with a small donation via Paypal or credit card that will go towards supporting the news and commentary you've come to appreciate.
Tags
Facebook Steve Stephens