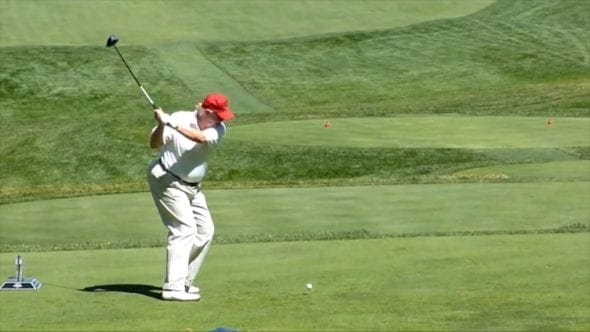 President Donald Trump is spending Sunday working on health care over twitter and a round of golf.

Sunday morning, the president tweeted that health care is anything but dead.

Anybody (especially Fake News media) who thinks that Repeal & Replace of ObamaCare is dead does not know the love and strength in R Party!

President Trump also told his twitter followers that talks are still going on.

Talks on Repealing and Replacing ObamaCare are, and have been, going on, and will continue until such time as a deal is hopefully struck.

The president’s motorcade then delivered Trump, Sen. Rand Paul (R-KY), and OMB Director Mick Mulvaney to the Trump National Golf Course in Sterling, Virginia for a meeting over a round of golf.

Senator Paul talked to reporters after playing golf with Trump.

“We had a great day with the president. Played some golf, and we talked and we talked about a little bit of health care. I continue to be very optimistic that we are getting closer and closer to an agreement on repealing Obamacare,” Paul said.