How long would firemen remain the nation’s genial mascot if they forced you to move into a hotel for a few days because you smelled smoke in the garage? As you were wondering if ten years of chainsaw, lawn mower and leaf blower gas cans were about to be launched into a low earth orbit while you waited for firemen to arrive, once the truck arrived the first responders weren’t worried. 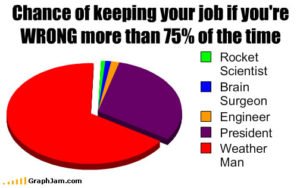 They knew in 30 seconds the smell originated in an overheating freezer, and unplugging it solved the problem. But the brass was concerned.

The chief worried that since your house didn’t go up in a giant fireball, you would be so relieved that you’d fail to view the problem as the narrow escape from a fiery death that it was.

Consequently, you might be tempted to plug the freezer back into the socket after they departed; potentially melting you and the lamb chops if the freezer shorted out while you slept.

That’s why, to impress the gravity of the situation on your family, the chief delivered a scary, arm–waving lecture and ordered you to earn two nights of Hilton points at Embassy Suites.

Unlikely you say? Tell that to the National Weather Service.

It was responsible for scaring airlines into canceling 9,000 flights, schools into closing, the federal government into delaying three hours, the DC Metro into cancelling transit services for the handicapped and a variety of other private businesses into shutting down on Tuesday for a storm that put a mere 2 inches on snow on the ground in Washington, DC.

Even worse, the NWS knew “Winter Storm Stella” was going to be more on the order of Snow Shower Sweetie but it refused to revise the forecast. The Associated Press reports, “After announcing that snow could reach record levels in the city, NWS meteorologists in New York and other Northeast cities held a conference call Monday afternoon about computer models that dramatically cut predicted totals.”

Taking a cue from “climate scientists” who never cut back on their hyperventilating over smoldering polar bears – in spite of their computer model’s failure to come close to predicting how the climate has changed – the weather service took a stern line on sleet.

Instead of calling off the evacuation of the Eastern Seaboard, they decided to stick with hysteria. This monumentally bad decision relied on that byword of the modern bureaucrat: “Extreme caution.”

These Chicken Littles felt people wouldn’t view a storm with a potential for just two to seven inches of snow as a harbinger of the apocalypse. Which is right, since it isn’t.

Greg Carbin, chief of forecast operations at the Weather Prediction Center observed, “I actually think in the overall scheme that the actions [by states and cities] taken in advance of the event were exceptional.”

If “exceptional” is another word for lunatic overreaction, then right on!

The NWS thought costing taxpayers millions of dollars in lost time, revenue and emergency daycare was a small price to pay if it prevented one granny from slipping on her way to the mailbox.

In their defense the weather wardens at the NWS are under a certain amount of pressure from the incoming Trump administration. Since it rained on him at the inauguration, the president has felt the NWS might be secretly participating in the “resistance.”

I’ve written the NWS is under a severe hiring freeze warning, which comes at a bad time for the organization because it’s been down 650 employees and no has appeared to notice. The solution for the weather mavens is to reinvent the NWS and make it part of the nation’s public safety apparatus, which the Washington Post says might allow NWS to exploit the hiring loophole Trump left for agencies involved in the military, public safety or public health.

If the NWS brass can finesse this textbook example of mission creep, the guy who eyeballs the rain gauge at the airport will join Seal Team 6 on the front lines of homeland defense.

Downgrading “Winter Storm Stella” into “Scattered Flurries Flo” and lifting the No Fly Zone on the East coast might have been accurate, but it wouldn’t enhance the sense of urgency management wants to convey to the White House.

Just mentioning these potential cuts in a previous column was enough to unleash hounds of humidity. My protestations that I’ve had my own Wi–Fi weather station on the roof for years fell on deaf ears connected to a dangerous high–anger zone.

I’ve suggesting the NWS concentrate on getting the data and let the private sector handle the forecasts, which in the case of the Weather Channel have proven to be more accurate. This latest exercise in paternalism and over–reaction hasn’t changed my mind.