How many weather people does it take to change a forecast? Evidently more than we currently possess. 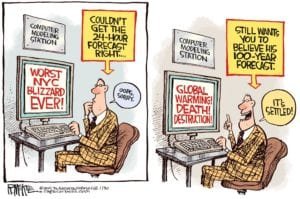 The union hopes it can slip through a loophole under cover of a rhetorical fog bank. Trump’s order doesn’t apply to agencies involved in the military, public safety or public health. The Washington Post says the NWS is hoping to reclassify itself as an integral part of the nation’s public safety apparatus: First responders when the precipitation hits the fan.

If NWS brass has its way, soldiers fighting for our freedom, anti–terror agents protecting the homeland and doctors battling dread disease will be joined by the guy who eyeballs the rain gauge at the airport. Each doing their small part in the vital effort to keep taxpayers alive and paying taxes.

Normally you would call this sort of bureaucratic aggrandizement “mission creep” but in the case of the weather service we’ll call it moisture creep.

The real problem facing weather wizards is it’s difficult to make the case for 650 new hires before Hurricane Donald arrives, when the desks have been empty for years and no one, outside the cleaning crew that dusts the monitors, has noticed.

A union functionary claims the vacant slots are “Emergency Essential” and it’s a big deal, “meaning those employees are critical to the life-saving mission of the NWS, so they must report to work (in hurricanes, floods, blizzards, furloughs, etc.).”

That’s a confusing explanation. I’d have thought an employee who shows up at the office after being furloughed is a potential source of workplace violence, not a reason to consider NWS workers the equivalent of Marines with barometers. As for the rest of the examples, when the morgue is empty it’s easy enough to claim your agency was responsible, but where’s the evidence these vacant slots represent a “life–saving mission?”

When a city is short of cops or has a surplus of demonstrators crime goes up. With a shortage of doctors patients pile up. But it will take some convincing to persuade me a shortage of weather oracles encourages tornadoes.

Making the case the NWS is a public safety necessity is difficult when the weather service has trouble coping with normal weather. Last week, while a blizzard was slamming into Maine and California was wondering if leftist sanctuaries would protect citizens and illegals from flood waters, the NWS system went offline.

A case could be made the cat was out of the bag and Maine and California were already familiar with the weather, but knowing if the rain was expected to stop would have been helpful to the sandbag crew.

Instead two “core routers” failed and the system was offline for three hours. The WaPost’s weather blog reminds us NWS systems failed as Hurricane Matthew was bearing down on Florida last October and in July it experienced another network issue.

It’s almost as if Hillary is the IT consultant.

Even if NWS bureaucrats can convince Trump a weather watcher wielding a weathervane is the public safety equal of a doctor brandishing a thermometer, there is the vetting problem.

In a government that yawns over classified phone call transcripts being leaked to the opposition media there’s a surprising amount of paranoia regarding the five–day forecast. Higher level NWS employees are for some unknown reason required to have a security clearance.

It’s not like you can hide the weather, just go outside and you know as much as President Trump. The only forecasts that have any usefulness are next day predictions. Three and five–day forecasts, which you can get from any weather poodle on TV, are about as reliable as a Republican Congressman’s promise to repeal Obamacare.

I suppose if your life is wrapped up in humidity the staffing shortfall is a big problem, but to me it looks like a good way to save money. It would be cheaper to let NWS focus on gathering weather data and let the private sector handle the forecasts. Using the same data the NWS employs, the Weather Channel is already more accurate and if you don’t like those global warming fanatics there’s always your local TV weather babe.

Why fight it? The missing 650 employees are approximately 14 percent of total employment. Since Trump wants to cut the federal workforce by 20 percent, the NWS’ head start puts it well on the way to meeting that goal.

It’s new motto could be: All the Weather at 80 Percent of the Cost!

Support Conservative Daily News with a small donation via Paypal or credit card that will go towards supporting the news and commentary you've come to appreciate.
Tags
government spending national weather service